A Chinese restaurant that has stood on a Bankers Hill corner for 35 years is now in the shadow of a wrecking ball.

Graham Downes and BLOKHAUS Development in July purchased a trio of properties including the Mandarin House at 2604 Fifth Ave. for $800,000, Evergreen Apartments at 2642 Fifth Ave. for $1.5 million, and The Britt Scripps Inn on 406 Maple St. for $2.7 million.

“I’ve been following the property market, so when these three properties came on the market I was interested in terms of what could happen if the three properties were adjoined or they worked together in a complementary fashion,” said Downes.

The apartments and inn will remain intact, and the Mandarin House may be a site for potential development, said Downes. He is unsure of its future, and options include tearing it down, leaving the Mandarin House or changing it to be another restaurant. Downes said there has been interest from “some major restaurant players” in town.

“Mostly, we don’t think it’s the highest best use for that,” said Downes. “We think it’s a nice place to live. If I had my druthers — it’s a financing thing and I don’t know what the market can bear in the next three to four years — but definitely my preference would be to build an 80-room hotel on that property and envelope all of the buildings into one great, very contemporary hotel, a boutique hotel on the corner. And then use the Britt Scripps as sort of a funky annex to that hotel with its nine rooms.” 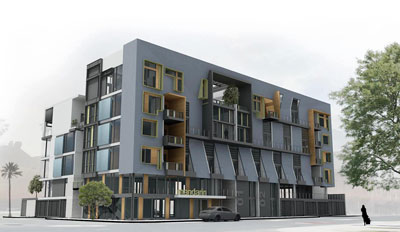 A rendering of Graham Downes' plan for the corner of Fifth Avenue and Maple Street in San Diego.

If he were to tear down the Mandarin House, he plans to put a 25-unit apartment building in its place.

The Mandarin House’s lease expires this year, and an extension is contingent on what plans Downes decides on. If he decides to build the 25-unit plan, he plans to break ground in six months to a year and completely finish in 18 to 24 months.

The properties have also gotten interest from buyers at a price higher than Downes paid — and if he’s offered a price he can’t refuse he may discharge one or all of the properties, he said. That decision would be made within the next six months. He has the apartments listed for $1.85 million, $2.5 million for the Britt Scripps Inn and $3 million for Mandarin House. It is not his full intention to sell, he said.

“I would like to develop because the whole premise to buying these things was not to flip them, it was to create value and a sense of place in that corner. I really had a vision for how that could be a very special place in Bankers Hill,” said Downes.

Since purchasing the properties, the apartments on Fifth Avenue were repainted, and five of the 13 units were remodeled.

“We remodeled five units that were vacant, and we put them back on the market and upgraded the exterior,” said Downes. “We basically gave it a much more fresh and cleaner look and brought a few things up to code.”

Downes plans to rebrand The Britt Scripps Inn “The Britt.” He said the structure is in “impeccable condition” and he only plans to upgrade some of the amenities.

“We’re going to turn it into more of a boutique product that will appeal to a more broader audience,” said Downes. “Maybe we could funk it up a bit, put some color in it, do what we do.”

The Britt Scripps Inn is a three-story, nine-suite Queen Anne-style Victorian bed and breakfast located behind the Mandarin House. It was built in 1887.

“We’ve worked on a lot of old properties. We don’t restore — I’m not a preservation person. I don’t like to preserve things; I think that’s for taxidermists. I’m actually trying to create new things with old things, to improve the condition and cause people to be inspired and enlightened and entertained, delighted,” said Downes.

The art, wall covering, furnishings and beddings are all items Downes is considering to change out — “things right now would represent to people that there’s a little bit of a 'granny factor,' and try to make it sort of upbeat,” he said. He also hopes to upgrade the technology including the website and booking systems, and reposition the hotel to build its event business.

“My niche in real estate is using my architectural prowess to make the most out of buildings that already have some potential,” said Downes. “I work a lot with what they call adaptive reuse, which is really buildings that may have potential, or they’re run down, or they’re old, or the site has other potential that incorporates the existing building, and not just a complete demolition and new construction on an existing site. That’s been my legacy for that last 10 to 15 years of development.”

The properties sit on 35,000 square feet, and the Britt Scripps was originally offered for $2.5 million, the apartments for $1.5 million and $3.5 million for the Mandarin House. Danny Fitzgerald, Michael Burton and Pasquale Ioele of Cassidy Turley represented the buyer, Downes and BLOKHAUS Development, on behalf of MandarinHaus LP; and Bradford Perry and Lin Martin of PerryCRE represented the seller, Hattersley Group LLC, in the transaction.

“Bankers Hill to me is sort of an overlooked [district] in San Diego,” said Downes, who bought a house in the area six years ago. “Many times it happens that close to the core where all of the attention is, lies a piece of land or district that has been overlooked. And Golden Hill has always been one in San Diego and definitely Bankers Hill.”