A laborer views the ongoing construction of the new Central Library downtown.Photo by Sam Hodgson/Bloomberg

If you have gone to a Padres game this season or have been near the East Village of San Diego, you have probably noticed a large building under construction with a dome-shaped roof.

The $185 million project is the new Central Library. It is approximately 75 percent complete, with all of the concrete structure finished and the steel-framed dome structure on the top of the building that goes down into the heart of the library completely assembled.

The new library's dome will become the iconic fixture and will cover the three-story reading room.

The library, which will also have two floors designated for a charter school, and the dome's design are the brainchild of architect Rob Wellington Quigley.

At the end of July, construction crews were preparing to place the shade panels around the dome and getting ready to start construction of the 350-seat auditorium on the site's south end, located on 330 Park Boulevard, one block up from Petco Park. 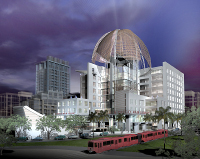 A rendering shows what the new library will look like.

The new auditorium, which will replace an existing 180-seat facility, will also have large doors that will allow the facility to turn into more of an amphitheater so guests can enjoy the San Diego sun.

“We have to get the auditorium knocked out, so that’s where all of our efforts are at right now,” said Carmen Vann, project executive for Turner Construction. “We are also focused on tying up the interiors.”

Turner is the construction manager at risk and leading the assembly of the nine-story 497,652-square-foot library that will also have two levels of underground parking, and an outdoor plaza and café. The company will turn the project over to the city in February.

Then, library staff will start transferring all of the materials from the old library on E Street in downtown San Diego. At this time, new equipment will also be installed to get ready for the library's grand opening in July 2013.

The main reason for a new library was because the existing one on E Street was built in the 1950s and is outdated, according to Marion Moss Hubbard, senior public information officer for the San Diego Public Library.

“We have outgrown our space here,” she said.

The new library will more than double the size of the current Central Library and allow for all of its publication collections to be out on display for the public to actually browse themselves.

“About two-third of our collection now is in two levels of our basement,” Hubbard said. “What we will do now in the Central Library is be able to bring those items out into the open. When you go and look on a bookshelf, you don’t just usually look for one book. Your creativity leads you in other ways to other places in the library to look. And so by having more of our collection out for people to be able to see, they’ll see so many more resources that we have available to them that are for their taking.”

The new library will also have 22 seminar rooms, so people will be able to break up into small groups; a teen center that will triple the existing one's size, and have a juice bar and gaming center; and the city’s TV-24 media center.

The approximately 500 students from the charter school, which will be run by the San Diego Unified School District, will have access to the television studio and their own access to the library.

“They will be able to do internships and find out how to do video production,” Hubbard said. “It’s going to be a great alliance.”

In addition, the new library will use radio frequency chips in books, allowing staff to sort through books quicker and more efficiently, according to Hubbard.

“That will free up our staff to be able to do more interaction with the public (and) more direct service,” she said.

The new Central Library is funded via $80 million of redevelopment money, a $20 million California library grant, $20 million from the San Diego Unified School District and $66 million in private donations.

One of the largest donations has come from Irwin and Joan Jacobs, who have given approximately $20 million.

It still has not been decided what will happen to the current Central Library, according to Hubbard. She said city officials want to take their time, since the facade is considered a historic building.