Hotels in the central part of San Diego are changing — not just the ones that already exist, but also plans for those that are yet to be built.

Plans for a 525-room hotel, which could be built on the southern block of Lane Field, have been placed on indefinite hold. But the northern parcel, which had been considered for a 275-room Aviana Suites, is now expected to be inhabited by a 250-room Hilton Garden Inn and a 150-room Hilton Homewood Suites with retail and restaurants to be constructed together in a single tower. The 525-room hotel was originally expected to be constructed concurrently with the smaller ones, but that won’t happen now.

The Lane Field plan is a joint development of Lankford & Associates, C.W. Clark Inc., and Hardage Suite Hotels. The combined entity, known as Lane Field San Diego Developers LLC, will have a 66-year lease on the property.

The Corky McMillin Companies, developer of Liberty Station, also concluded a couple of years ago that a couple of smaller hotels in the area would have a greater chance of success than a large one.

The company, which had originally planned to develop a 650-room hotel across a channel from the main part of the development, is now saying it is more likely to have two, or perhaps three, hotels that are similar to the 200-room Courtyard by Marriott and the 150-room Hilton Homewood Suites that already exist on the former Naval Training Center site. 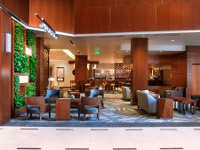 The new lobby at the Westin Gaslamp Quarter. The hotel near Horton Plaza downtown is one of several in the area that have been renovated recently.

Under plans previously approved by Centre City Development Corp., the development called for two hotels — one with 1,058 rooms and another with 193 rooms, in the first phase. There would also be a 164-room hotel in the second phase along with perhaps more than 1 million square feet of office space in excess of 250,000 square feet of retail at buildout.

That project is awaiting a National Environmental Policy Act appeal that has placed the development in legal limbo for the time being.

Another large project is a proposed 500-room expansion of the 1,190-room Hilton San Diego Bayfront that will be included in the same master environmental impact report as the planned 1 million-square-foot expansion of the San Diego Convention Center.

Numerous smaller hotel projects are being considered in downtown San Diego as well.

Perry Dealy, Dealy Development president and CEO, who also is overseeing the Broadway Complex project, is planning the 393-room Columbia Tower Hotel at A and Columbia streets.

Dealy said he is looking for conventional or equity placement financing for the hotel. If all goes according to plan, Columbia Tower could get under way by the middle of next year with completion about 20 months later.

The Fat City Lofts project, originally planned as a multifamily project until Solar Turbines pushed the plan into a buzz saw, has been resurrected as a hotel development.

The projected $40 million project will consist of two separate, six-story hotels, with a total of 364 hotel rooms and 182 parking spaces on a 62,809-square-foot lot on the city block bound by Pacific Highway, Ivy, Hawthorn and California streets.

The project is slated to have two pools and spas, two dining rooms, meeting rooms, a gym, and two retail and restaurant spaces totaling 2,500 square feet.

Construction is expected to start in early 2013.

Terramar Retail Centers is proposing a much more modest 80 to 100-room hotel that would be part of a revamped and expanded Seaport Village. 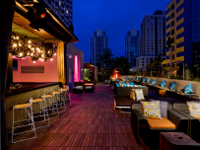 A complete redesign of The W Hotel downtown was finished earlier this summer.

A large project — which, like Manchester’s plan, has an indefinite timetable — is Sunroad Asset Management’s proposal for a hotel as large as 600 rooms that would be built next to the former Reuben E. Lee restaurant on Harbor Island.

While new hotels continue to be planned, existing hotels either have or are in the process of getting some multimillion-dollar makeovers.

The San Diego Marriott Marquis & Marina is in the midst of a $200 million upgrade slated to be completed in 2016.

The lobby, concierge level and fitness center were all remodeled, and the hotel's pool area was expanded to include private cabanas, fire pits, a separate children's play area, and a poolside restaurant and bar. All 1,360 rooms were renovated as well.

The W Hotel, which had been owned by Sunstone Hotel Investors until that firm deeded it back along with 10 other hotels last year, has undergone some significant upgrades of its own.

The W, acquired by Starwood Hotels & Resorts (NYSE: HOT) for $56 million in April of last year, saw a complete redesign of the property, including its living room area with its multifunctional seating areas and wireless Internet access and reading selections.

The 450-room Westin Gaslamp Quarter on Broadway Circle, acquired by a Pebblebrook Hotel Trust (NYSE:PEB) entity for about $107 million in April 2011, started as an Omni when it was completed in 1987. Along with a complete rehabilitation of the guest rooms, the multimillion-dollar upgrade includes a redo of all the hotel’s public areas.

Major investors, such as real estate investment trusts, continue to keep an eye out for trophy hotel properties. With room rates climbing and vacancies falling, hotel owners have been reluctant to part with these assets lately. While these large transactions have been few and far between, there have been some this year.

The most recent as of press time was the 436-room Westin Emerald Plaza in downtown San Diego acquired by DiamondRock Hospitality Co. (NYSE: DRH) for $122.8 million in July. That was part of a $495 million, four-hotel deal that also included the 362-room Hilton Boston; the 406-room Westin Washington, D.C.; and the 258-room Hilton Burlington in Vermont.

Another sizable hotel that was part of a portfolio sale this year was the 211-room Hilton Hotel on Harbor Island. That property, along with two hotels in San Francisco and another in Lake Buena Vista, Fla., were acquired by Square Mile Capital Management of New York City as part of a deed-in-lieu-of-foreclosure action at the beginning of the year, according to CoStar Group (Nasdaq: CSGP).

Smaller hotels can command strong prices if they are well-situated. The 107-room Inn at Rancho Santa Fe sold for $28 million last April to a partnership of Siguler Guff & Co. and John Moores’ JMI Realty.