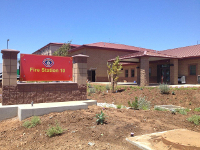 There are 18 major camps or cantonment areas spread across 125,000 acres of varied terrain at Camp Pendleton Marine Corps Base. These cantonments are a World War II legacy designed to thwart an attack on the base. One of the largest is 41 Area, a 50-acre site that supports a mini base with its own personnel quarters, fitness center and mess hall, and is home to operational and community facilities for the 1st Reconnaissance Battalion (RECON) and the 1st Air Naval Gunfire Liaison (ANGLICO).

As part of the $3.1 billion modernization of Camp Pendleton, a $124.3 million 41 Area Facilities contract was awarded to Webcor Builders/R.A. Burch Joint Venture in September 2010 to bring 41 Area into the 21st century.

According to Brent Bunting, Webcor senior project manager, the 41 Area project is actually a combination of three separate projects, which not only makes it logistically challenging, but also requires preplanning and coordinating with NAVFAC Southwest, the Resident Officer in Charge of Construction and the base Public Works Officer.

The goal of Camp Pendleton’s modernization is to promote professional development, support unit cohesion and improve the quality of life for all Marines. With that goal in mind, the new BEQ incorporates a village atmosphere with a promenade, outdoor amphitheater and amenities that include picnic shelters, barbeques and recreation facilities. Walkways and bridges connecting the entire tri-site complex provide easy access to home, recreation, training and work. Recreation and training site improvements include an athletic field with running track, physical training stations, parachute practice jump pits and a combat training pit.

Lee H. Saunders, public affairs pfficer for NAVFAC Southwest, said the 41 Area Facilities project broke ground in April 2011 with demolition activities, and mass excavation activities were under way by July 2011. The Joint Venture expects to log close to a million man hours by the time the project is complete, and Saunders said approximately 340,000 cumulative man hours have been logged to date. Bunting estimated around 250 workers are on site daily this summer.

“All buildings are currently erected to full height. Many are installing roof trusses and some with roofing and waterproofing systems. Interior rough-ins are ongoing for many of the facilities,” Saunders said.

“Local businesses have helped exceed the prescribed goals of the project,” Bunting said.

All new facilities construction at Camp Pendleton is required to meet minimum LEED Silver certification in an effort to meet the Secretary of the Navy’s mandatory renewable energy goals. With the government’s energy mandates at the forefront, design for the facilities, which encompasses approximately 325,000 square feet of new construction, emphasizes the building envelopes and decreasing total energy usage by increasing insulation, and installing high efficiency fixtures and equipment.

Saunders said 41 Area’s Emergency Response Station has an estimated occupancy date of Aug. 8, 2012. It is expected that all 41 Area Facilities will be completed by next summer. There are five planned modifications for furniture, fixtures and equipment, which if issued, could increase the cumulative contract to $142.1 million.