Murrieta: A local city with a global focus

Recognizing the importance of opportunities afforded by globalization and its location on the Pacific Rim, the city of Murrieta has created an international focus for its economic development strategy. This strategy is designed to encourage area companies to expand their businesses locally by increasing the export of their products and services to the expanding overseas markets, and to encourage the growth of foreign direct investments to promote the continued growth of Murrieta’s regional economy.

The Murrieta City Council approved the establishment of an International Business Center (IBC) at City Hall, which is intended to focus the area’s resources on promoting international connections to expand the regional economy. Through the IBC, the city has hosted high-level business and governmental delegations from Indonesia, Vietnam, Kenya, Iraq and China, among other countries.

One such visit from Singapore resulted in a regional business breakfast at Murrieta’s Bear Creek Golf Club, at which representatives of Singapore’s government described business partnership opportunities for area businesses that would allow them to grow their businesses in the Murrieta area, while selling their products through Singapore. 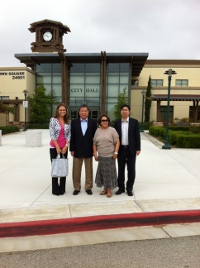 “I believe that one of the ways to keep growing the companies that we have here is to encourage our firms to find additional markets for their products,” said Rick Dudley, Murrieta city manager.

“The purchasing power in many countries has grown dramatically and this creates an outstanding opportunity for Murrieta area companies to grow in this area by expanding their sales overseas.”

Murrieta is already home to a number of successful exporters, including Nimbus Water, Cryoquip and Challenger Water, as well as other companies. Nimbus has hosted a delegation from the Iraqi Water Ministry looking to purchase their products, which include green technologies such as solar-powered water treatment systems. Nimbus also hosted a Vietnamese delegation.

Murrieta’s City Council has recently approved a “Memorandum of Understanding” with the U.S. Department of Commerce/International Trade Administration to help work in partnership to grow exports from the region. The agreement memorializes a strong relationship that already exists between the city and the Regional Director of the U.S. Foreign and Commercial Service, Fred Latuperissa.

The city has long been an active leader in promoting the growth of foreign direct investments in the region through the EB-5 program. Due to the difficulty which many businesses face in obtaining new construction financing through traditional sources, the city has worked to encourage EB-5 investments to create new jobs within the community.

Continental East Development, based in Murrieta, has created the new USA Continental Regional Center, which has funded the major expansion of the RadNet medical imaging center in Murrieta. The city has worked with American Redevelopment Solutions, an EB-5 regional center, which is funding the development of a mixed use retail/office project, which is currently under construction near the Murrieta Civic Center.

Recently, the Murrieta City Council entered into an agreement with the County of Shaoxing, China, to promote the growth of trade, as well as to cultivate cultural and educational relationships between the two communities. The city recently worked with Paulson Manufacturing and Cryoquip, two major area exporters, to host a high level delegation from Shaoxing to Murrieta. The event was filmed by Phoenix TV, a leading Chinese television network.

Due to the work of the County’s Office of Foreign Trade, the Murrieta/Temecula Twin Cities area has now been incorporated into the city of San Diego’s Foreign Trade Zone, which provides a major business incentive to local manufacturers.

The city of Murrieta sees a great opportunity in the global market as a basis for growing our area economy and is embracing this opportunity for Murrieta’s businesses and for the region.