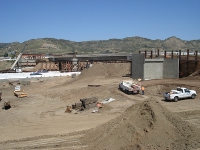 Construction work on Interstate 215 and Clinton Keith Road is one of several road improvement projects under way in the Murrieta area.

The city of Murrieta recently completed work on major improvements to Interstate 15/California Oaks Road, Interstate 215/Clinton Keith Road and the I-215/Los Alamos Road interchanges — major freeway interchanges bisecting the city. The projects included the widening of the existing two-lane bridges to six lanes and the construction of new freeway access ramps intended to improve circulation in some of the busiest areas of Murrieta.

The road work was bid and managed by the city of Murrieta Public Works Department, as part of its $150 million Capital Improvement Program. Work on these major interchange projects began in 2007 and was completed in August, 2012. The projects cost a total of approximately $70 million, with funding in part through a federal Grant under the American Reinvestment and Recovery Act (ARRA) — Riverside County’s top priority projects under the ARRA program. The projects required close collaboration among the city of Murrieta, the Riverside County Transportation Commission, Western Riverside Council of Governments (WRCOG), the California Department of Transportation (CALTRANS) and Federal Highway Administration.

“It is highly unusual for a city of nearly 105,000 people to be constructing major interchange projects on Interstate freeways,” said Pat Thomas, Murrieta’s director of public works and city engineer.

“We were pleased with the close partnership which we have been able to achieve with the various regional, state and federal agencies involved in this process. We are focused on creating the infrastructure needed to improve traffic flow and to expand business opportunities in Murrieta,” Thomas added.

The city’s Public Works Department has also recently completed work on the construction of Whitewood Road as a four-lane, north-south arterial roadway between Clinton Keith Road and Baxter Road. The $5 million project was completed in eight months with funding provided by the Transportation Uniform Mitigation Fee (TUMF) program and City Redevelopment Agency funds.

This project will serve the newly opened Loma Linda University Medical Center-Murrieta campus, and along with the new I-215/Clinton-Keith Road interchange, will create improved access into the North Murrieta technology corridor.

The project cost $30 million and was funded through the State Transportation Improvement Program (STIP), TUMF and City Development Impact Fee (DIF) program. This interchange area was highly congested and the project has improved traffic circulation in this key area of the city.

“We are pleased that this investment is occurring, since it will help improve access to Murrieta’s growing westside area and to the Kalmia/California Oaks business corridors, as well as to the Madison Avenue retail corridor,” said Kim Davidson, the city’s business development manager.

Early work is under way to plan other major road improvements in Murrieta. This includes construction of Madison Avenue and Guava Street as four-lane roads, which will open access to the South Murrieta Business Corridor.

In addition, the city of Murrieta is working with the city of Temecula to prepare for the construction of Jackson Avenue, which will connect with Ynez Road in Temecula. This project will open up opportunities for the development of the I-15/Jackson Avenue Corporate Park in Murrieta.

The city is also working on plans to reconstruct the I-15/Los Alamos Road overcrossing. This project will improve access to the Madison Avenue business corridor, and developing areas between I-15 and I-215 in Central Murrieta along Los Alamos Road. Future plans are also in the works for construction of a new freeway interchange at I-215 and Keller Road (located between Clinton Keith Road and Scott Road) in the vicinity of the new North Murrieta technology corridor. The new freeway interchange will provide direct access to the land designated for office and commercial development on the east side of I-215 north of Clinton Keith Road.

The city of Murrieta has been working cooperatively with other governmental agencies in Riverside County to construct regional transportation infrastructure supporting Southwest Riverside County. The Riverside County Transportation Commission (RCTC) recently completed the I-215 Widening Project South Segment (I-15 to Scott Road), widening the freeway to three lanes in each direction.

RCTC will be starting work on the I-215 Widening Project Middle Segment (Scott Road to Nuevo Road) by the end of 2012, improving traffic flow between Murrieta and the University of California, Riverside. Other major regional infrastructure projects include the extension of Clinton Keith Road between I-215 and state Route 79 (Winchester Road) managed by the County of Riverside and scheduled to begin in 2013. The City of Murrieta is also working with the city of Temecula and Caltrans on construction of a new major freeway interchange north of Winchester Road, known as French Valley Parkway, and planned expansion of I-15 between Winchester Road and the I-15/I-215 split in Murrieta. The first phase of the project started in June 2012 and should be complete by December 2013. Phase 2 is scheduled to begin in 2014.