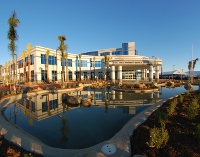 “My husband was given a hopeless diagnosis by two different doctors, so I took him to Loma Linda, and it’s a miracle — he is alive today.”

“Our young daughter was critically injured in a car accident and flown to LLUMC. She is alive and well today, a mother and wife.”

“My baby was born way too early and should not have survived, but she is six years, and thriving!”

These are just some of many patient testimonials from residents of Temecula, Murrieta, Menifee and surrounding communities, expressing stories of the life-saving care they have experienced at Loma Linda University Medical Center, in San Bernardino.

Loma Linda University Medical Center, which recently celebrated 105 years of service to the community, is a Seventh-day Adventist-owned and operated teaching hospital, and, through the years, has made an impact on the Murrieta and Temecula region. The excitement in the community for the arrival of Loma Linda University Medical Center-Murrieta was demonstrated on Feb. 6, 2011 when more than 10,000 area residents attended the hospital's open house celebration.

Loma Linda University Medical Center-Murrieta began as a unique joint venture, one that started with a group of dedicated physicians and active community members. Together, they formed Physicians Hospital of Murrieta, and led by Dr. John Piconi, they raised $17.5 million, bought land, hired an architect, achieved approval from OSHPD and broke ground.

These partners in the project recognized the serious need in the community for more health care services, and put their personal resources and time into the project.

During this same time, Loma Linda University Medical Center was exploring the region for growth opportunities and the two parties began a nine-month process of negotiations.

The partnership was formed and the name, Loma Linda University Medical Center-Murrieta was selected; the project moved forward at a rapid pace.

As the hospital was nearing completion, national health care legislation passed in March of 2010, which made it impossible for founding physician partners to maintain their ownership and practice medicine in the hospital they helped to found.

Loma Linda University Health System became the sole owner of the hospital in early 2011, but our founding physicians continue to serve the hospital in a variety of leadership roles.

City, state support for the hospital

The city of Murrieta leadership played a vital role in the success of the project as they rallied around the project, making it a top priority. City councilmembers, mayors and directors all supported the hospital through its journey, and helped in the appeal to the federal government regarding our physician owners.

LLUMC-Murrieta broke ground in December of 2007 and received its certificate of occupancy in February 2011, completing a remarkable 26 months of construction.

Hospital leadership and staff prepared for the department of health inspection, passed the survey and opened for patient care on April 15, 2011.

Murrieta’s mayor, at the time of the hospital’s open house, referred to the hospital as “the Murrieta Miracle.” It represents many visions from a variety of people and entities who all dreamt of bringing high-level care to the Murrieta-Temecula region and to enhance and save lives.

The facility was designed to support the physician’s ability to meet the needs of their patients by paying attention to the details of patient flow and care plans. No expense was spared in the building process. The hospital contains state-of-the-art digital imaging, the latest in laboratory sciences, large surgery suites, all private patient rooms and private maternity rooms.

After achieving its license, Joint Commission approval and Medicare provider number, the hospital made cardiology a primary focus. After months of training and millions of dollars in staff and equipment, the facility now offers the region’s first and only open heart surgery program.

The hospital has two cath labs that provide interventional treatments; a hybrid operating room with the Siemens Artis Zeego imaging technology; three standard operating rooms, and a critical care unit and telemetry units to provide the appropriate level of care as patients recover.

The project currently consists of the hospital, plant buildings and a five-story Professional Office Building. The POB houses a variety of physicians, practices and hospital services including rehabilitation, cardiology, infectious disease, internal medicine, outpatient pharmacy, medical oncology, radiation oncology, outpatient diagnostics, community outreach, outpatient behavioral medicine and many other specialties. Two additional hospital towers are planned that would bring the bed count to approximately 340 beds and adding critically needed services. Two additional Professional Office Buildings are also in the plans at this time, creating ample space to grow to support the needs of the community.

Loma Linda University Medical Center has a long history of caring for mind, body and spirit. They have also made significant advancements in medicine through innovation and clinical trials. LLUMC-Murrieta will build on this academic, faith-based model while striving to be accessible and efficient as a community hospital. Part of the developing innovations at LLUMC-Murrieta will be a focus on wellness and prevention. Etched on the wall in the lobby is the phrase, “To Make Man Whole,” a philosophy that is shared by all who have participated in the opening and operating this new center of healing and hope.