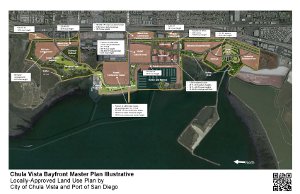 A plan to redevelop Chula Vista's waterfront will now become a reality after the California Coastal Commission approved the Chula Vista Bayfront Master Plan on Thursday.

Over the next 24 years, 556 acres of the city’s waterfront will be transformed with three hotels; a conference center; 1,500 multifamily housing units built by Pacifica Cos.; two RV parks; restaurants; a mix of office and commercial buildings; and 238 acres of open space that will include 130 acres of public parks, trails and bike paths, and buffers that will protect sensitive habitat. The proposed buildings would have a maximum height of 200 feet.

“This is unprecedented, in a good way,” said Chula Vista Mayor Cheryl Cox. “It’s going to bring jobs and allow residents and visitors to fully enjoy the waterfront in ways they haven’t before."

The Bayfront Master Plan includes the area west of Interstate 5, south of state Route 54 and north of Palomar Street. The project would be completed in four phases in three redevelopment districts.

The Sweetwater District (north of F Street) would incorporate an RV park and campground; approximately 240 square feet of office and mixed-use commercial space; a 21-acre park; and 14.7 acres of seasonal wetlands.

The Otay District (south of J Street) would include a 237-space RV park; a 24-acre park; two industrial business parks; and a 25-acre buffer zone.

Before construction can begin on the housing project, a coastal development permit must be issued by the city of Chula Vista so that the request for proposal can be released and builders can be hired, according to Pacifica officials. They anticipate construction to begin in about 18 months, if everything goes according to plan.

According to Mayor Cox and Port of San Diego officials, a request for proposal to find a master developer of the Bayfront Master Plan should be released in the first quarter of 2013. This master developer would head up the majority of the projects on the table, including the convention center, hotels, some of the commercial and mixed-use land and RV parks.

Cox said on Aug. 9 that Gaylord Entertainment Co. (NYSE: GET) currently is not in the running to be the master developer and no developers are being recruited at this time. Gaylord Entertainment pulled out of the resort plans in 2008 because of potential labor issues. The Tennessee-based company could not be reached for comment as of press time.

“Gaylord might be interested after the RFP comes out,” Cox said. “We want to put the RFP out first and get see the feedback from developers. It could be that we pick more than one master developer.”

Eric Crocket, assistant director of development services, said the Bayfront Master Plan has a build cost between $1.5 billion and $2 billion.

The development cost for the hotel and convention center was estimated by Gaylord Entertainment to be between $78 million and $130 million, depending on size and configuration. Pacifica will contribute $25 million in accordance with a land swap agreement.

The financing agreement for the Chula Vista Bayfront Master Plan was approved in May. The agreement lays the groundwork for the financing, development and construction of public improvements and infrastructure along the bayfront.

The agreement also establishes that after a developer is selected to construct the resort hotel, the Port and city of Chula Vista will collaborate to develop a funding agreement to utilize the money generated from the Bayfront Master Plan to finance the construction of public improvements through the formation of a joint powers authority and the issuance of revenue bonds.

The four revenue sources also will be utilized for debt service net of operations and maintenance costs resulting from the development of the Master Plan, which includes maintenance of parks, open space, parking lots and rights-of-way.

Chula Vista and Port of San Diego officials have said the Bayfront Master Plan will create 7,000 construction jobs and more than 2,000 permanent jobs while generating $1.3 billion for the region's economy over the next 20 years.

Cox added that the city of Chula Vista and Port of San Diego think the Bayfront Master Plan is going to be a catalyst for redevelopment in neighboring cities like Imperial Beach and National City.

Over the years, public workshops have been held, land has been purchased, consultants have been hired, and local commissions have moved the project forward to get to this point of the process.