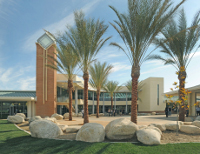 Students at Grossmont Community College in El Cajon have several new amenities on campus, such as a new student union building, the Griffin Center (pictured).

On the heels of a roughly $35 million renovation project at El Cajon’s Grossmont Community College, which recently brought the campus expanded and renovated versions of its student center, the Griffin Center, and its Student and Administrative Services Building, the Grossmont-Cuyamaca Community College District is eyeing more improvements.

The East County college district recently unveiled a proposed master plan it says will meet the needs of a growing student base, and is considering placing a bond measure on the November ballot to fit the need. But before the district makes a move on that, its officials and students are enjoying the benefits of an improved Grossmont campus after a pair of renovations took more than a year to complete.

Students recently spent their first semester using the updated facilities, which were funded by a 2002 bond measure approved by East County voters, Proposition R. Altogether, the bond measure funded 13 projects, and the completion of the 13th and final Proposition R project came just in time for Grossmont College’s 50th anniversary.

Dale Switzer, the senior director of facilities planning and development for the Grossmont-Cuyamaca Community College District, said the project was completed around $1 million under budget, and that it was perhaps the smoothest operation of all the district’s recent projects. He also said it was the most challenging of the recent Prop. R projects.

“There were so many people that had to be re-located,” Switzer said.

More than 100 college employees had to be moved into roughly 20 modular buildings in the school’s parking lot, which had to be built prior to construction, or moved into an existing building on campus that had been recently vacated, but needed a remodel of its own before it was ready to temporarily house dislocated employees.

People walking into either the Griffin Center or administrative services building today have a hard time believing they are still standing in the existing buildings, Switzer added. So many things were changed, from the addition of windows to improve and increase the amount of natural light to the addition of bike racks and amenities.

“We basically gutted everything on the interior, and expanded it,” Switzer said.

Among other parts of the renovation design, those changes earned each of the two building LEED certifications from the U.S. Green Building Council — LEED Silver for the Student and Administrative Services building and LEED Gold for the Griffin Center. The two buildings are the first LEED-certified projects anywhere in the Grossmont-Cuyamaca Community College District.

A substantial amount of what was gutted was recycled, earning the project LEED points. Certain types of forested material, specifically regarded as more sustainable, were also chosen for many areas where wood was needed, Switzer said. Sustainable or high efficiency glazings, carpets and mechanical and electrical systems were also used and installed.

“When we decided to go for a LEED, we had to look at all those materials, and that was part of our specifications (for the designers), Switzer said.

Designed by Architects Mosher Drew, and with construction led by project manager Gafcon Inc. and general contractor Rudolph and Sletten Inc., the project entailed re-vamping about 48,000 square feet of existing space between the two buildings, and adding 36,000 square feet.

Expanded by about 16,000 square feet, the new Student Services and Administration building has brought together many services that used to be spread all over campus, said Tim Flood, Grossmont Community College Vice President of Administrative Services.

“What these buildings were able to do was kind of centrally house student support services,” Flood said. “We had also outgrown those, so that’s why the services were kind of dispersed throughout the campus.”

Grossmont College has a student body of around 20,000.

The now 46,734-square-foot Griffin Center, located right next to the administration building, includes meeting rooms for student groups, seating for dining, lounging or study; access to the school’s career center and a lobby with a 10-foot video screen, four food stations, and a mini-market. It’s also home to the offices and work areas of the Associated Students, the culinary arts program, student health services, the career and job placement center and Disabled Student Programs and Services.

Flood said Proposition R took Grossmont about one-third of the way though the school’s old facilities master plan. The update to the master plan that’s in process now may lead to an initiative in November’s general election to fund other projects the district says are needed still, but the district’s governing board has yet to decide if it will ask that of voters.

“Although we’ve got new buildings on campus, we still have facilities that are over 50 years old, that weren’t touched by the bond measure,” Flood said. “Technology has changed completely from the 60s to where we are now; the infrastructure needs to change, and we need to be able to continue to adapt.”