Facility will be first of its kind in Northern Baja California

Many know of the San Diego Convention Center and what it has done to help revitalize downtown, the Gaslamp Quarter and East Village.

The Convention Center in America’s Finest City has been such a success in some people’s eyes, that it is going for its third expansion to accommodate Comic-Con and possible larger conventions.

But what many may not know is that just a few miles south of the U.S.-Mexico border, a convention center is being built for the first time for the Tijuana region, and the plan is being modeled like the one in San Diego.

Near the Pacific Ocean, where the cities of Tijuana and Rosarito meet, an approximately $45 million (600 million pesos) metropolitan convention center is being built. It rests on two city limits but will also serve the city of Tecate, which neighbors Tijuana to the east.

“It will act as a central hub for conventions for the region,” said Lic. Gabriel Camarena Salinas, project coordinator.

The facility, dubbed El Centro Metropolitano de Convenciones Baja California, or metropolitan convention center Baja California, is being built on roughly 1 million square feet of undeveloped land, which was donated in part by a private citizen. The master plan calls for three phases. 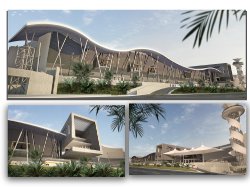 A rendering shows the new $45 million convention center being built between Tijuana and Rosarito in Mexico.

The first phase, which is being built now, will encompass more than 300,000 square feet of meeting space with 17 rooms and an exhibitor hall. There will also be 15 docks for loading and unloading materials and equipment; a command center for audio and visual broadcasting; a lobby area with retail shops and a registration area; and 3,000 spaces for parking.

The first phase is scheduled to be completed and open in March.

When this convention center for the Northern Baja California region is fully built out, it will be approximately the size of the San Diego Convention Center.

“We want a regional convention center to bring in expos in industries that are already established here,” Camarena Salinas said. “Tijuana has the highest concentration of medical device manufacturing employment and aerospace firms in North America. We have electronics plants, clean-tech manufacturers and Toyota has a plant in Tijuana now.”

Camarena Salinas said the convention center’s goal is to not only attract business and industries that are in the region, but also have the facility be a catalyst for mass development around it.

“We are looking for this convention center to transform the area like the San Diego Convention Center did to the Gaslamp and downtown,” Camarena Salinas explained. “We believe based on the models of San Diego, Phoenix, Ariz., [and] Mazatlan (Mexico), you will see hotels, retail shops [and] restaurants, be built around the Metropolitan Convention Center of Baja California.

“It won’t happen right away, but in the fourth and fifth year of the convention, the area will transform. People are going to want to come.”

The facility is a public-private partnership with funding coming from the state of Baja California, the cities of Rosarito, Tijuana and Tecate, and private investors such as the ones who donated the land where the convention center sits.

Construction on the Metropolitan Convention Center started in 2008, but it’s a project that has been discussed for more than 30 years.

Camarena Salinas said neither Tijuana nor the region has ever had a convention center.

“Realistically, there was never any money to make this happen and not enough of a push from the government and the private sector,” said Camarena Salinas, who is also the president of the Consejo Centro Metropolitano de Convenciones de Baja California, or the Council for the Central Metropolitan Conventions of Baja California.

But in 2008, Gov. of Baja California, Lic. Jose Guadalupe Osuna Milan, helped make a push to make the Metropolitan Convention Center a reality.

The Consejo de Dearrollo Economico de Tijuana and its council of convention centers presented the three-phase plan to Osuna Milan. The governor brought into the idea and with his aid, government funding was awarded to the project to go along with private investments.

There are already two major conventions scheduled at the new convention center.

The first one will take place the same month it opens next March, with Grupo Televisa’s Espacio, an expo that gathers around 30,000 college students from Mexico and around the world, and pairs them up with public and private companies and agencies.

The second convention is already booked and is geared toward industrial companies of Mexico, and will occur August 2013.