SBA 2012 Small Business of the Year 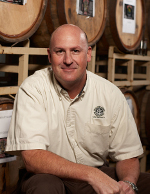 Beer is no longer considered suitable only for the backyard, coolers and tailgating. White has helped make beer tasting a tourist attraction in San Diego that is on par with wine. Two of Ballast Point’s beers — the Sculpin India Pale Ale and Dorado Double IPA — are highly sought after and have won numerous awards.

Home Brew Mart Inc., dba Ballast Point Brewing Company, was started by White in San Diego in 1992. As an avid home brewer, he realized the need for quality home brew supplies in San Diego. Upon graduation from the University of California, Los Angeles, White decided that his home brew shop would become a reality. At that time, the burgeoning home brew craft was just beginning to gain momentum, and within the first year of operation, Home Brew Mart became one of the West Coast's premier home brew shops.

Shortly after opening, White was joined by Yuseff Cherney, also a recent college graduate. Yuseff had been teaching home brewing at his alma mater, the University of California, San Diego, and was a noted award-winning home brewer. The university was a great meeting place for young brewers, and coincidentally Yuseff met up with White in one of his advanced brewing classes. He and Chris White (no relation to Jack) began work on liquid yeast cultures, which Chris later developed into White Labs Pure Brewing Cultures, one of the world's foremost suppliers of brewing yeasts.

White and Yuseff then teamed up with Pete A'hearn, White’s long- time friend and college roommate, and opened Ballast Point Brewing Company in 1996. The recipes were developed as home brews in White’s backyard, and soon the world would begin to taste what only the privileged few had tried from White’s refrigerator at home.

Ballast Point Brewing Company continued to grow and more fermenting tanks were added until the walls could not contain any more stainless steel. Production expanded into 22-ounce bottles, commonly referred to as "bombers," and soon the beer began reaching outside the immediate local market of San Diego.

With demand outreaching capacity, a new facility was added in Scripps Ranch. Construction began in 2004 on the new facility and capacity doubled within a year. A 12-ounce bottling line was added, and in 2005 three of the main production beers went into six-packs. Now, the company is beer shipping beer to select parts of the United States, Japan, the Philippines and Canada.