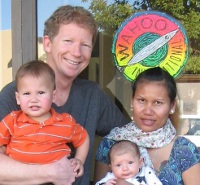 Wahoo International is a body board and resin manufacturing company based in Oceanside.

The company sells a variety of surfing-related products: Solarez, a resin repair for surfboards that hardens in three minutes and is sold in shops worldwide; Lifesled, a water sled (similar to a giant body board) that is attached to the back of water crafts and used in rescues; and Bully Board, a body board designed to accommodate more than one person.

Gary Fisher was born in Los Angeles in 1955 and attended Pepperdine University in 1977, receiving his B.S. in biology. He then received his California secondary teaching credential in 1979, and began beaching biology in Hawaii until 1982.

Fisher eventually returned to school and attended the University of California, Berkeley, graduating with a degree in MPH nutrition in 1984. It was in this same year that Fisher first began his exploration in the surf industry and marketplace.

Fisher opened a factory in Israel where he produced surfboards using state of the art molding techniques and epoxy resigns. The boards were faster, stronger and lighter than the conventional board, but never really caught on with surfers.

Surfers prefer custom-shaped boards, rather than ones made from molds. Fisher sold the factory and moved back to the United States to start a new venture.

With surfboards out of the picture, Fisher entered the newly emerging boogieboard market. He also began researching and designing a UV cure resin which could be used for ding repair.

His new company began producing boogieboards tailored to the "large people's market," and also began bottling the UV cure he had created under the name Solarez. The boards were a huge hit,and Solarez became the No. 1 ding repair product in the world.

Later in 1990, Fisher modified the large boggieboards to be towed behind a jet-ski for the purpose of high-surf rescues.

Named the Lifesled, it is now sold in nearly 30 countries and to all branches of the U.S. military, police, lifeguards, Border Patrol and other first responders. The boards also helped in the emergence of a new type of surfing called tow-in surfing, which is done around the world.

Today, Fisher’s company is based just a short distance from his house. Fisher is married with two kids, Clayton and Emily, and lives in La Costa.