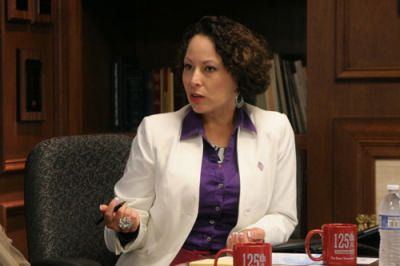 Individual plants will one day have their own microprocessor to transmit a signal, saying they need water and fertilizer.

A group of forward-thinking technology leaders discussed what the future looks like in the wireless sector at a recent roundtable at The Daily Transcript sponsored by CohnReznick.

“When you look at Wi-Fi and what is happening in our industry, we haven’t even touched the surface with where we are going,” said Dale Stein, owner and CEO of Voice Smart Networks. “It’s an exciting field to be in.”

Like plants, each person's health and diet will one day be monitored via embedded wireless transmissions.

The participants agree that they are in a fast-changing industry, but with that lightning-speed rate of acceleration comes some security concerns.

Companies that start off on the mobile platform can compromise their security unless they initially build security into their infrastructure from the ground up.

The general public views mobile as a cheap and easy way to do things, but not many people question the source of the technology.

“Apps cost nothing,” said Sherry Simburger, vice president of business development at Taranet Inc. “But a lot of people don’t look at apps and say, who made this or where did it come from? Where is the server hosted?”

The technology Carrier IQ is embedded into phones to collect information, such as data, SMS, phone numbers and emails.

“So part of the technology is like anything online," she said. "You are giving away a lot of personal information, and you don’t really know who you are giving it away to."

There are currently more connected devices than people on the planet, or 1.8 devices per person. That number is expected to skyrocket to seven per person.

But as the number of mobile devices goes up, so do network vulnerabilities.

The term “BYOD,” or “Bring Your Own Device,” is becoming more and more popular in everyday life.

But when those devices plug into the network, the security challenge is whether they are contagious and can infect it.

Europe has “amazing” standards when it comes to mobile security; the United States does not, said Simburger.

“Since the internet is not a national thing it’s hard to regulate,” she said.

"In military, security is so important. They need to understand it down to the node level,” she said.

“That’s an expensive way to do business but it’s necessary because security is critical. It’s a life or death situation in the military,” she said.

The price of security can be a deciding factor for some companies, however.

For data center operator American Internet Services, its wide spectrum of customers — from large companies to startups in San Diego — widely differ in that area of cost.

“The requirements of a Fortune 50 company or SPAWAR is very different from a startup,” said Tim Caulfield, CEO of American Internet Services.

Intuitively, all companies want something as secure and robust as possible, but those desires don't always match budgets.

“You get into the trade-offs of what companies can afford and are willing to pay at a particular point in time,” said Caulfield.

Some startups, depending on the sector they are in, consider security as very important, whereas some do not.

The down side of that is it can create vulnerabilities in the system, potentially exposing others.

Manuel Jaime, managing director of private equity firm Senoma Group LLC, says it can be hard to justify the cost of security from a revenue model standpoint.

"When people sit down and make tradeoffs, the revenue generating things tend to go to the top of the priority list and the avoidance of bad things — as important as they are — go to the bottom,” he said.

The average home has six connected devices, and that figure could skyrocket to 200.

“The investment growth possibilities are almost endless but the challenge is twofold,” he said.

The first is it's no longer about wireless or mobile — it’s about the revenue or business models the technology enables.

“It’s not about connectivity but about the business of what customers are doing,” he said.

The second challenge is what kind of startup companies are out there looking for cash. From a capital provider's perspective, they aren't big enough.

“This value of death of $2 million to $5 million revenue businesses that will never be the next Zynga or Google,” he said.

For those companies, which might become $50 million businesses, that's not sexy enough for some VCs to invest in.

His firm invests in high-growth technology companies with revenues in the $3 million to $100 million range.

It’s both a challenge and opportunity to help those smaller businesses that depend on connected devices to go from $2 million to $20 million.

Some of those companies are born right in San Diego's backyard via EvoNexus, an arm of the San Diego-based nonprofit tech industry association, CommNexus.

Its downtown and University Towne Centre incubators are getting ready to welcome five chosen startups, which were picked out of a pool of 106 companies.

“We thought they could succeed. The idea is to graduate companies we think have a chance of going further,” said Walter Davis, vice president of organizational development at CommNexus.

The rent-free incubators are modeled after existing breeding grounds for startups.

“Folks who get excited about this saw what happened south of Market Street in San Francisco. They think we can do this downtown,” said Davis.

San Diego is also trying to make a name for itself in the wireless health space, with Qualcomm Inc. (Nasdaq: QCOM) and West Wireless emerging as the pioneers.

However, some obstacles — like finding the right revenue models and getting companies started and scaled — have kept the industry from exploding so far.

Nearly a decade ago, Jaime predicted that 10 to 15 $100 million wireless health companies would be around by now.

“We haven’t gotten there, but I think the potential is huge because all the technology is there and there's pressure on the health system,” said Jaime. "From a selfish San Diego-based standpoint, it’s our opportunity to lose because we’ve got all the wireless, all the IT and health care domain knowledge."

Davis reminds the group not to lose sight of the real business goal in mind.

“My body doesn’t know anything about wireless. It knows about health,” said Davis. “Once we start focusing too hard on this I am not sure we can go back to do what we are supposed to be doing — improving health.”

Keeping in mind that human element of wireless is also important in attaining security in the mobile space, Simburger notes.

“We talk about how expensive it can be," she said. "But if you train personnel on an enterprise level it’s so much more cost efficient to teach them where the vulnerabilities are.”

The highest number of purchasers of mobile devices this year were in the lowest income bracket. There are now more people with cell phones (4.8 billion) than there are with toothbrushes (4.2 billion).

That means there is more of a need than ever for employers to train that influx of new users on what not to do in order to save the company costs, headaches and liabilities.

That “don’t do” list includes clicking on embedded links, downloading applications from untrusted vendors or connecting to an unsecure network, she said.

“A lot of people who come to work with technology are unaware of its possibilities, limitations and dangers,” she said.