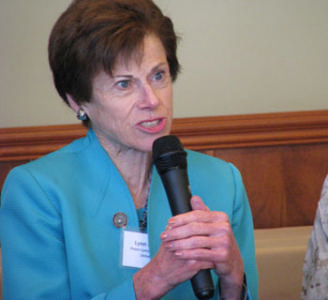 The economy faces the challenge of absorbing military members in the local job market at a time when uncertainty is constraining the private sector’s ability to create more jobs, panelists at a recent forum said.

“We have, as we documented, the strongest influence of retirees and veterans hoping to stay in the area, with the enormous challenge of absorbing military people … in the job market. That’s probably the biggest challenge we’re facing in the next two to three years,” said Lynn Reaser, chief economist of Point Loma Nazarene’s Fermanian Business & Economic Institute.

Local military, community and industry leaders discussed the military’s effect on the job market in San Diego at a roundtable discussion last week at the Marine Memorial Golf Course at Camp Pendleton, hosted by The Daily Transcript.

“The unemployment rate in San Diego today is about 7.25 percent. As people in the military who are not now part of that number move into the labor force, that’s going to slow down the ability of the county to reduce that unemployment rate,” Reaser said. “We’re creating jobs now at an annual pace at about 20,000 jobs per year. Several months ago, it was closer to 30,000.”

She added that creating jobs in the private sector is difficult when there’s a “huge amount” of uncertainty about another wave of sequestration.

As a result of budget cuts, the Marine Corps is decreasing from 202,000 to 182,000, and there will be about 3,500 fewer marines in the Southern California area, said Brig. Gen. Vincent Coglianese, commanding general of Marine Corps Installations West, Marine Corps Base Camp Pendleton.

Two hundred to 300 Marines leave Camp Pendleton every week to go back to the civilian community, and only 17 percent stay in the area, Coglianese said. Most of them are in “survival mode” and go back to where they’re from, choosing to stay at a family member’s house.

About 61 percent of those leaving the Marines are younger than 25.

There’s a transition program in place for Marines, but some go into it too soon before they leave. Many Marines don’t know what they want to do, and their military specialty skills may not be directly transferrable to a private sector position.

“These are very, very young men and women getting out. I think – and nothing against the education – but we as a society told them that ‘You have to go to college to be successful,’ and I think that’s somewhat of a wrong message,” Coglianese said.

He added that the job market needs blue-collar workers, and that the corporate world could hire Marines at any level and provide incentives for them to go to school.

Howard Pace, vice president, chief strategist at ViaSat (Nasdaq: VSAT) said ViaSat hires a lot of military members. He said the service members coming out are “tremendous assets, beyond just being Marines and understanding communications. The discipline, the hard work, the ethos, the integrity, all these things that the U.S. Marine Corps beats into their skulls on a day-to-day basis are things we absolutely are looking for and want and value probably more than other traits. We can train people, but you can’t teach integrity.”

While it may be a challenge for the job market to absorb the military members coming out of service, it’s also important to keep them in the area.

“California loses a lot of intellectual capital and a lot of people that would stay and buy a home and get a second job,” Coglianese said.

Jerry Kern, deputy mayor of Oceanside, said there’s competition for these “very polite, motivated” people coming out of the service. He suggested creating incentives for them to stay in the area, such as the ability to enroll in a state institution with in-state tuition costs.

All Marines eventually get out of the military, Coglianese said.

“Whether you’re a general or not, you’re all getting out. It’s like in the NFL. You ask, ‘How long are you going to play?’ ‘Forever.’ No, three and a half years,” Coglianese said. “We have to be thinking about what we’re going to do when we grow up and leave the Marine Corps.”

Steve Kildoo, CEO of the San Marcos Chamber of Commerce, said there is a benefit to pulling together employers who can create opportunities for Marines “because of the discipline, because of the ability to get up and show up at work, which too often is not something we seem to find in new employees.”

Marty Lorenzo, a member at Mintz Levin, said the Marine Corps can take the “bottoms-up” approach to creating jobs, which is by fostering entrepreneurs.

“Large institutions are spinning off smaller entrepreneurs, and the Marine Corps can do that as well,” Lorenzo said. “We’ve got Archi’s Acres – it’s a local success story here where they train Marines and other veterans to become farmers, and have that as a way of transitioning to civilian life.”

Dec. 5, 2014 -- George Chamberlin speaks with Dr. Lynn Reaser, chief economist for Point Loma Nazarene University's Fermanian Business & Economic Institute, about how the economy fared in 2014 and what we can all expect to happen in 2015.