Budget cuts cause companies to diversify

Budget cuts cause companies to diversify 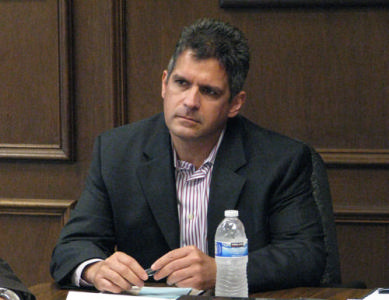 Defense contractors are turning to the commercial sector, as budget cuts hit their No. 1 customer.

“For us, we’ve been looking at diversifying our customer base,” said Eric Basu, president and CEO of Sentek Consulting.

Basu and other local executives discussed the effects of sequestration at a recent roundtable discussion hosted by The Daily Transcript and sponsored by Mintz Levin Cohn Ferris Glovsky and Popeo PC.

“It’s really hard to find things that translate well from DOD over to commercial. Cybersecurity luckily is one of those things that has not a direct correlation, but it’s probably about 75 percent,” Basu said.

He said the verbiage needs to be changed when translating from defense to commercial, as well as the sales pitch. Companies should expect smaller projects with higher billing rates and more bench time.

If a company only sticks with its current customer, it’s going to “lose” because that customer is going to see the reduction and may even go away, said Michael Spencer, senior director for business development at Tapestry Solutions.

“If you don’t have new customers that you’re lining up right now … then you’re really going to be in a tough bind, because your customer will definitely see a reduction, your program will see a reduction,” Spencer said. “So you have to have more programs that are smaller as opposed to a few programs that are larger in order to maintain or grow moving forward. And that’s really the reality that’s setting in with us -- is that we can fight it, we can complain about it or we can try to position ourselves to deal with it.”

John Yi, founder, chairman and CEO of KES, said he understands the value of diversification, but finds his company is so industry specific that it is difficult to translate the work to other markets or industries.

Basu explained that there has to be a “very pronounced shift.”

“You can make the decision to go commercial, and then you try to send the same person who can sell at SPAWAR over to Qualcomm and they can’t even get in the door -- because they don’t speak the language, they don’t have connections,” Basu said.

He said his company has been slowly transforming over the past year-and-a-half and is learning a lot of lessons along the way, with some successes and some failures.

“There aren’t many companies who do both well," Basu said. "ViaSat does both well; GE of course does both well. But there are a lot of companies that, they do government very well or they do commercial very well -- they don’t do both.”

Doug Ortel, program management director at Lockheed Martin, said it’s about adapting, and quoted Darwin who claimed that it’s not the strongest but the most adaptable who survive.

Lockheed Martin (NYSE: LMT) has “re-vectored” its scientists and engineers toward projects in adjacent markets.

An engineer at Lockheed Martin who was passionate about mobile fish pens that float off of the big island of Hawaii was able to do the command and control of the cages for a company called Kampachi Farms.

“We’re leveraging the technology we have into the commercial market,” Ortel said.

Yi’s company sells service hours, and government typically wants them for six months, a year or three years, whereas the commercial world wants someone for two weeks, Yi said.

“The pricing has to be different, and we don’t have engineers in the closet that we can send to provide that,” Yi said.

“But they’re sitting on the bench most of the time, so it actually ends up evening out,” Basu said.

Tony Nufer, general manager of the southwest region for VPSI, said price pressure on the commercial side might cause government to expect a price break.

“Yet it’s not an easy translation because government acquisition requirements are tremendous,” Nufer said. “The financial management requires are significantly more; the contractual management requirements are significantly more. The reporting is, frankly, to the point of ridiculous in many cases. So they want the same price that you would charge a commercial entity with an exponentially amount more oversight management and control. And so that’s an unrealistic expectation from the government.”

Yi said going into the commercial side is almost like starting another company.

“There’s only 24 hours in the day, and so it’s the commitment, it’s the investment and how you want to spend your time -- because the reality is that you still have to make sure you do your day job and then look for these opportunities,” Yi said.

Stewart Bornhoft, vice president at Sullivan International, agreed that diversification into other markets is important, but also is the flexibility to be able to adapt to changing needs.

He said his clients are from all three major services and the EPA and “you cannot treat them as one size fits all.”

“For a long time I know the Navy’s mantra here had been ‘faster, better, cheaper.’ To that I add a fourth one, which is ‘easier.’ If you can make it easier for your client to be able to solicit the services and then perform the work, then that’s how we endear ourselves to our client,” Bornhoft said.

Spencer added that it’s important to make adjustments to the market as it shifts.

Jim Miller, CEO at Del Rey Systems, said another way he’s found to diversify is to look to the three major universities in the area.

He said Del Rey Systems has tapped into professors and grad students as a resource, because universities are still receiving money.

“Universities want to think about stuff and do things, but they don’t want to do business – that’s what we do,” Miller said.

SDMAC’s Military Economic Impact Study will come out on Sept. 26, said Jamie Moraga, president and CEO of IntelliSolutions Inc. and SDMAC’s president-elect. She said the uncertainty makes it’s hard to plan and hard to forecast.

“The report will show that we’re starting to see some of the effects this year, and 2014 is not going to be looking so great,” Moraga said.

Jesse Hamilton, president at AFCEA, said those in the Young AFCEANs program tend to choose commercial over government.

“It’s unfortunate but we see these numbers -- we’ll get 40 attendees and then one of those will transfer over to DOD,” Hamilton said.

Jonathan Cain, member at Mintz Levin, said those attendees are probably aware of the uncertainty in the funding, and there hasn’t been a full year appropriation in three years, maybe longer.

He said Mintz Levin has a government relations group who spends time at Capitol Hill and they believe the periodic continuing resolutions aren’t going to be any different for the foreseeable future.

“We’re going to be on this 60-, 90- to maybe on a good day six month-budget cycle for a long time, I think,” Cain said. “And people talk about the budget but it doesn’t really mean that much because it’s the need of the day. Think of what happens to all this talk about the budget and CRs if we end up in Syria. … The adjustments are going to get pretty dramatic to pay for that.”

Yi said, “This too shall pass.”

“And we’ve seen the pendulums swing back and forth. It just takes a really long time – like the Titanic trying to turn, but hopefully we won’t sink before we turn,” Yi said.

May 17, 2011 -- Reporter Claire Trageser checks out a demonstration event for the F-35 Lightning II fighter jet, a program for which several San Diego companies supply parts.