Jessop’s name synonymous with jewelry in San Diego since 1892

By JENNIFER McENTEE, Special to The Daily Transcript
Thursday, October 25, 2012

Jim Jessop always wanted to go into the jewelry business. He has the seventh grade school paper to prove it.

“I wrote about how I wanted to be a jeweler,” Jessop recalled.

Jessop didn’t have to go far to realize his childhood dream. He comes from a long line of jewelers. Five generations of Jessops have been jewelers, first in England then in San Diego. The Jessop’s local legacy began in 1892 when Jim Jessop’s great-grandfather, Joseph Jessop, opened his first shop in downtown San Diego.

Today, Jim Jessop is owner and president of the Jessop’s company, considered to be San Diego’s oldest jewelry business. Jessop’s has one retail location, in the Emerald Plaza building downtown. Jessop’s previously had locations at the Hotel del Coronado and Horton Plaza.

Jim Jessop said it’s possible that another location could be added in the future, perhaps once the economy shows some improvement. “A second store is a good balance for any small retailer,” Jessop said.

Jessop’s isn’t just considering locations for a second store. It’s also evaluating sites for its historic pendulum clock, which dates back to the 1907 Sacramento State Fair. The 22-foot tall clock has 300 moving parts and 20 dials that tell the time at various locations throughout the world. The owners of Horton Plaza have asked Jessop’s to find a new location for the ornate street clock, and though several options have been eliminated, a new public site has yet to be finalized, according to Jessop. 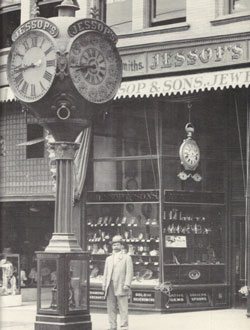 The first photo taken after installation of the Jessop clock in front of the store at 952 Fifth Ave. in 1907. The landmark clock remains downtown today. Photo courtesy of Jim Jessop

In the meantime, the jewelry business has been having a bit of fun with the search. On its website and Facebook page, Jessop’s has been holding a contest called “Around Town with the Clock.” Jim Jessop has been posing in photos with a large cardboard cutout of the clock at various attractions throughout San Diego. Fans are asked to guess where he is. Each guess is worth an entry in a drawing for a vintage 14-carat white gold pin valued at $1,200. Clues so far have included the Port Pavilion on Broadway Pier, the Santa Fe Depot and Balboa Park.

Jessop’s name recognition and history in San Diego has earned the retailer a loyal customer base, according to Jessop.

“We’re lucky to have been in San Diego for a long tenure,” Jessop said. “We’ve had wonderful clients for a long time, and it’s also wonderful to be able to find new clients.”

Jessop said the store’s niche is fine diamonds and jewelry, with three certified gemologists on staff. “Our clients understand that the jewelry we make is of good quality,” he said.

Jessop is the only member of his family still involved in the business. His three grown sons have found vocations in other fields. Still, he has many long-standing employees.

“Some have been with me for anywhere from 18 to 27 years,” Jessop said. “So they’re not Jessop family, but they might as well be.”