“In January 1938, San Diego County Employees Credit Union opened its doors on the principal that people come first and profits second,” said Teresa Halleck, president and CEO in an email.

In 1973, it changed its name to the San Diego County Credit Union and expanded from only allowing employees of the county to join to allow all those who lived or worked in San Diego County, according to Halleck.

“SDCCU has grown considerably from the humble roots of a small credit union to the 10th largest in the United States,” Halleck said.

The credit union has 28 branch locations in San Diego, Riverside and Orange counties and is headquartered in Sorrento Valley. It has more than 238,000 members.

“Unlike most financial institutions, SDCCU does not issue stock or pay dividends to outside stockholders,” Halleck said. “Instead, earnings are returned to customers in the form of outstanding customer service and convenience coupled with loan rates, higher dividends on deposits and lower fees — in some instances, no fees at all.” 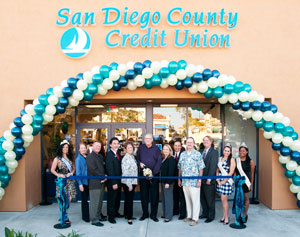 “SDCCU became the first locally based financial institution in San Diego to introduce SDCCU Mobile Deposit in December 2011,” Halleck said. “SDCCU’s mobile technologies not only provide convenience for customers to bank on the go, its banking platforms have transformed the way in which people shop, transact and manage their personal and household finances.”

In August, the credit union announced a new logo for its brand — “San Diego County Credit Union — It’s Not Big Bank Banking. It’s Better,” according to its website.