California companies look on the bright side

California companies look on the bright side 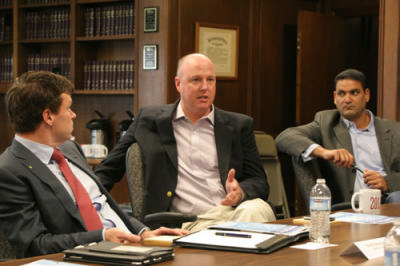 California is an increasingly tricky state to do business in, but local technology and manufacturing companies are finding ways to stay inside the Golden State lines.

One way to do that is by keeping brain power in San Diego but ramping up economic engines elsewhere, according to various industry players at a recent roundtable at The Daily Transcript.

The roundtable was produced in a partnership with the Consulate of Canada, San Diego.

The lieutenant governor in South Dakota wooed Robert Feeney, founder and CEO of MedVantx, to the low-tax state, offering a $4,800 tax credit for every employee the company hired for training.

“It was stunning, and it’s been a fantastic move,” Feeney said.

They did the math to set up the same center in San Diego; it wasn’t economically feasible.

Even though Digitaria would get better tax breaks by rooting in a city like Dallas, the digital marketing agency won't do it.

“It's unbelievable here. It’s what makes California special. But you have to augment it and split it up. You can’t have all 350 employees in San Diego," said Dan Khabie, CEO of Digitaria.

The company, which has offices in six U.S. states and overseas, manages websites, technology and data for global brands like General Electric Co. (NYSE: GE) and NBC.

Semantic Research employs the same tactic: planting a high-end software development team in California, promoting the benefits of being a California company, then growing throughout the rest of the country.

Charles Gillespie, president and chief operating officer, said the company has doubled in headcount in the last fiscal year, and almost all of that was growth in the national capital region or Florida, where many of its customers are.

Both Digitaria and Semantic are essentially capped at their San Diego headquarters.

While some companies are happy with their current setup, others are considering moves elsewhere.

His ATM and automation services company, which replaces dial-up communication lines in convenience store and supermarket chains, has grown 143 percent over the past three years.

“California used to be a natural place to start a business. We are blessed with so many natural resources and culture,” said Fowler.

He came to California in the mid-1980s, attracted to fertile grounds for capital and skilled talent coming out of the university structure.

In the past 20 years, however, there’s been an outsourcing of business to states that understand small businesses better than California does, he says.

“I don’t have a positive outlook for the state of California,” he admitted. “I think the state and local governments are in a constant state of disarray and I don’t see hope for that ending with the public unions gaining strength they have.”

The budget crisis is also threatening California’s public education system, which for years was the state’s greatest export.

His 6-year-old solar shaded parking company in Kearny Mesa went public in the first quarter of 2010.

“Now the rug is being pulled underneath the feet of education, so that wonderful product the state has had for so long is diminishing," said Wheatley.

“I do love the weather but there are other places with nice weather, too,” said Wheatley. “You have to ask yourself, is California a hot bed of innovation with a bunch of bright people who can’t wait to get things done? Or is it somewhere everyone has moved to, thinking that and realizing it’s perhaps not as fun anymore?”

Last month California voters passed Proposition 30, a $6 billion tax initiative that will raise sales taxes on all Californians and income taxes on the high-performers making more than $250,000 annually.

Metro areas outside California are licking their chops at the chance to lure unhappy companies inside their state lines.

The Greater Phoenix Economic Council is flying out 100 California-based CEOs of technology companies to the Phoenix area to tour and explore the market.

The region's business-friendly policies include lower capital gains taxes and a corporate income tax rate that will go down to 4.9 percent by 2017, as well as a $9,000 jobs tax credit and a $630 million tax credit program for export industries.

DriveCam, which makes and sells video driver safety programs used by commercial fleets, says its clients are finding it harder and harder to stay in California.

One of its large customers recently moved to Texas, primarily due to regulatory hurdles in California, said Chris Silver, director of marketing at DriveCam. A number of trade associations won’t hold conventions in California because they believe California is putting them out of business.

“The uncertainty of the government makes it worse," Silver said. "People are having a hard time deciding where to spend money because they are just waiting.”

They are trying to decide whether to purchase equipment or invest in people.

“It’s difficult because there are a bunch of us out there trying to get their business. It’s difficult for them trying to figure out where they get the biggest bang for their buck,” said Silver, whose company helps cut down on collision-related costs and fuel consumption.

Some California companies are finding an unlikely way to stay rooted in the state while reducing costs and getting better returns for their dollar. Companies have set up branch offices in Canada, operating as a California and U.S. corporation.

Immigration, says Wheatley, is one of the bright spots that will help the United States maintain economic leadership — but it needs to relax its stringent rules.

“We live in a country where people get advanced degrees and instead of paper-clipping a green card to that, which is what we should do, we spend taxpayers’ dollars hunting them down and imprisoning them before putting them on an airplane to send out of the country,” said Wheatley.

Gregory Garrabrants, president and CEO of BofI Federal Bank, agrees that every advanced degree — particularly a science degree — should have a green card attached, but the state needs the right welfare programs to support it.

Garrabrants' branchless bank is half the cost of a typical bank, so he considers himself a disrupter in the market.

“You can’t have unlimited, open immigration. You need that right labor and you also need the right help and assistance and social safety net,” he said.

Chinese and Indian Ph.D. students are flocking to British Columbia to study, for example.

“It’s easier for them to continue to stay and work in Canada under the work permit, than it is in the U.S.,” said Nabavi, who's based in Vancouver and works with technology and clean tech companies.

Microsoft (Nasdaq: MSFT) set up a Canadian operation for a period of time to exploit some of that talent.

“If we spent as much money on screening and interviewing as we do on interdiction, we could end up with a fabulous, massive work force,” said Wheatley. “You don’t need a wall, you just need a good filter.”

Khabie is seeing some migration to California occur, with car manufacturers sending small teams from Detroit to California.

They are opening research and development facilities to try and tap into innovation, then pushing that out to larger groups of people to deliver on it.

“That is the future of California. We tell employees it’s a privilege to be here,” he said.

Another way to save money is looking south of the border, where auto manufacturers can get skilled labor for $40 a day.

Wheatley has looked at Mexico but won't do it because his company touts an all-American product.

“If I was in a different business, I’d do it in a heartbeat. You can get everything you need there pretty inexpensively,” he said.

“We haven’t outsourced to Tijuana yet, but we continue to look at it for our business,” said Maquera. "We are bullish on our talent here.”

“Everybody wants them,” he said.

They exist in Northern California, but it’s hard to bring that talent to San Diego.

“We’d love to hire dozens more if we could,” said Fowler, who's started to hire Ph.D.s out of India on a temporary basis.

Some employees are recruited locally, including graduates of San Diego State’s M.B.A. program and University of California, San Diego graduates skilled in the data or analytics account management side.

DriveCam has also plucked up employees nearby.

The company, which has hired 40 people in the last year and a half, has targeted students coming out of a local university and are waiting for a couple more to graduate.

Wheatley said San Diego is not a hard place to convince others to move to, especially when hiring a New Jersey native already eyeing the sunny state, for example.

“There isn’t negotiation or argument that they need this or that. It’s done,” said Wheatley. “That is part of California’s cachet — everyone wants to live here."

Adjusting salaries to move to California can be an issue, but surprisingly, Digitaria employees cost more in its Minneapolis office than in San Diego, by at least 20 percent.

That’s because Fortune 500 companies in Minneapolis are willing to pay top dollar for those skill sets.

“Here they are more plentiful in terms of resources and top-notch developers," said Khabie. "We have not been able to find the level of technology people at any one of our offices like the level here.”

Khabie says 2013 will be a street fight to remain at the top of its game.

“The ability to move quickly will be really important. We will try to be as diverse as we can and touch as many businesses as we can,” he said.

“We are a digital business,” said Khabie. “We live online. As dollars flow from traditional business into digital dollars, our business has grown.”

Semantic Research is also trying to diversify its portfolio as the defense market enters unstable ground in 2013.

“We are starting to dip our toes in the water of health care and legal discovery and see if there can be applications for things we’ve perfected in our current domain in commercial sectors,” said Gillespie.

Feeney expects to benefit from the implementation of the Affordable Care Act in 2013.

“It’s both a real opportunity and chaos because we interact with health plans, pharmacy companies and physicians,” he said. "All business models are flipping upside down.”

Wheatley hopes to cash in on the flight-to-quality trend.

“I hope people are going to start saying it’s worth spending a bit more to get something that actually works and will work for a few years … and transition from container loads of cheap, plastic crap we’ve been importing and using once and throwing away,” he said.