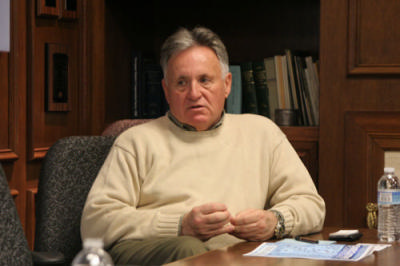 Maxwell Technologies has the potential to become a $1 billion company, according to its CEO David Schramm.

While headquartered in San Diego, about 82 percent of its revenue — estimated to reach $180 million this year — comes from outside the United States.

A group of technology and manufacturing executives gathered at a recent roundtable at The Daily Transcript.

The roundtable was produced in a partnership with the Consulate of Canada, San Diego.

Maxwell (Nasdaq: MXWL), founded in 1965, makes high voltage capacitors in Switzerland and has other offices in Munich, London and Shanghai.

Schramm prefers overseas markets because they follow through with plans to enact energy policies and green initiatives. On U.S. soil, it's a slow-moving process.

The plan to build the nation's first offshore wind farm off Cape Cod has been discussed for 12 years, he noted. The large solar panel project in the Mojave desert in southeastern California is tied up in the courts, he added.

Maxwell is not alone. Startups are also considering overseas locations, where regulatory hurdles aren't as high.

Telmedx provides live medical-grade video from a patient’s cellphone to keep them out of medical facilities.

“In this state you can’t predict what kind of insanity will come out of Sacramento. From a startup perspective, we have enough uncertainty in dealing with market acceptance,” said Richard Anglin, president and CEO of Telmedx.

Through a joint venture partner in Poland, the product is being marketed throughout Eastern Europe, said Anglin.

Telmedx was approached to move its operations base to Switzerland, with tax break incentives and access to a highly educated, multilingual work force.

The overseas market is also more appealing when it comes to capital.

“We’ve been trying to raise capital and we’ve gotten nowhere in California,” he said. “I am getting more interest from investors internationally than I am in this country.”

Foreign investors are wary of the high cost of doing business in California and ask if Anglin would be willing to move.

“If you give me the money, I say I’ll move wherever you want me to,” he said.

Still, capital is flowing into California companies. PCN Technology scored $5.25 million in venture funds this year. One investor was EnterTech Capital, which has offices in Pennsylvania and Ontario.

The communications networking company repurposes wires for IP communications, with customers such as GE (NYSE: GE) and Honeywell (NYSE: HON).

Their expansion is taking them to Europe in 2013, followed by Asia.

Facing high utility costs in California, Maxwell decided to open a new facility in Phoenix, where electricity averages six cents per kilowatt-hour. In California, it's 25 cents today, he noted.

“The manufacturing business will not stay in California,” said
Vankat Shastri, president and CEO of PCN Technology.

Some companies are able to bypass the expensive cost of overhead in California, however.

Software provider Radiant Technologies is pushing toward a virtual model, so they don’t need to worry about fronting the money for a bricks-and-mortar expansion.

“Most of the work is done remotely. Now we can have consultants all over the world,” said Kathy Pennington, vice president of services and delivery at Radiant.

“Even if we could it’s not clear we’d have one,” he said, explaining its virtual nature.

Despite its small headcount of five people, other states — including Wyoming and Nevada — are licking their chops at the chance to lure Telmedx away from California.

“If I take employees out of California and move there, you get a 20-percent increase in salary without paying them more ... because of quality of life issues, taxes and cost of living,” said Anglin.

Schramm said there's a long list of Maxwell employees who want to move to Phoenix because of that instantaneous spike in discretionary income.

Wyoming is offering Telmedx access to university students that want to stay in the state.

“We try to recruit people who want to live on the edge and out there. We find a lot of those younger people associated with universities,” said Anglin.

The company recently picked up a graduate from UCSD Rady School of Management.

“The reason I haven’t gone back is because the lifeblood of this country is its innovation, starting from the basement and building something of value," said Shastri.

The difference today is whether that senior studying engineering at UCSD will opt to work at a large company like Qualcomm, or hunker down with friends in their apartment to build the next big startup.

“If the conditions aren’t right for that, you’ve already lost half the game,” he said.

Startups need 100-percent focus on their services and products in order to win.

“If you focus attention on secondary stuff, it makes it harder for a startup to succeed," said Shastri.

Anglin is required to fill out a tedious form every quarter, a requirement for startups in California.

“The paper burdens are out of control. Why should I fill it out when I don’t have any revenue,” he said. "I should be doing other things."

Meanwhile, other countries are figuring out how to cultivate and encourage a startup culture.

MCStart is a collaboration between venture capital and industry to speed up the development of innovative medtech ideas in Europe.

Their belief is that medical innovation in the future will come from Europe, not the United States, according to their homepage.

On the flip side, said Shastri, California is a hotbed for employees that understand the startup culture. He thinks that California is the best state for a technology company to capitalize itself.

“California is a mixed bag. There are some real pluses but the negatives are getting bigger,” he said.

Other states are going to use those negatives as a competitive advantage to pull businesses out, he warns.

Canada is also throwing its hat in the competitive ring, luring talent that might otherwise head to California to create the next Google or Facebook.

Its international program attracts qualified labor from other countries by offering a fast track for getting a visa and becoming Canadian citizens.

“Companies are coming inbound for other reasons than the tax credit. The access to the labor pool,” said Scott Robertson, director of global research and development and government incentives at Deloitte & Touche.

One out of five Canadians can speak one more language other than English and French, he points out.

While incentives are alluring, companies like Maxwell plan to stick around San Diego.

“My Ph.D.s want to live here and my wife does, too. But we are driving out that middle core," said Schramm.

Those pressures aren't just coming from the state level. The federal government keeps tacking on reporting requirements and oversight, especially on defense contractors.

Working with less and becoming more efficient is a daunting endeavor, and Tapestry's development staff will likely expand in St. Louis and Florida over California.

Boeing already moved two programs from Long Beach to Oklahoma in 2010 to save money, noted Young.

“The shame in California is, with the pipeline it’s got, why would its onerous system become even more onerous,” said Shastri. “The problem we have in this state is it’s been so successful in the past, everyone takes it for granted."

Telmedx's product was showcased on William Shatner’s "Moving America Forward" TV show last month. Ironically, the state terminated one of its trials and threatened to pull its license for using electronic medical records.

"Our technology solves a problem and they want to shut it down," said Anglin.