They are also in town this week in conjunction with CommNexus' MarketLink program, which connects large companies like IMAX with startups around the globe. The intention is to bring their new technologies to life under the IMAX umbrella.

“We were here when IMAX started. What you’ve done is keep that excitement going, with changes, updates and innovations," said San Diego Mayor Bob Filner. "So it’s not just something that had a flash in the pan."

San Diego's dome got a makeover in 2008 that included a revamped sound system, seats, lighting and a new seamless screen.

Last year, a digital projection system was added, making it the first giant dome theater in the country to share a digital planetarium with an IMAX dome theater. 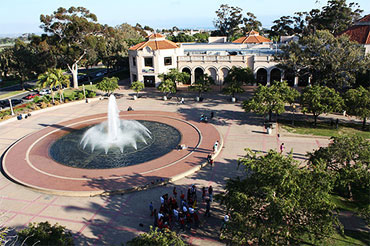 “It’s not innovation that started at one point and remained stagnant. As we know, innovation that does that dies," said Consul General of Canada David Fransen. "Technology has changed the way in which filming gets done, gets distributed and IMAX is growing with that.”

Fransen, who's based in Los Angeles, met with Filner last week to discuss potential partnerships between San Diego and Canada.

“We are going to do some more things to market Canada here,” promised Filner.

Many aren’t aware that well-known technology companies like IMAX are headquartered Canada, he added. The first IMAX screen opened in Toronto in 1971, followed by San Diego's dome debut in 1973.

“I know there’s great innovation in Canada. I wish we had more of that down here," said Rory Moore, chief executive of the wireless industry association CommNexus.

CommNexus is working with the Canadian consulate to form new relationships that never existed before. The long-term vision is for San Diego and Canada to incubate startups together.

"I think we can work something out in my lifetime," said Moore.

The Canadian consulate's small San Diego office is tasked with promoting relationships on the innovation front with the San Diego community.

"This is a small office for us but it’s one that actually does live up to that cliché -- it hits above its weight because this is a particularly innovative community," Fransen said.

IMAX’s presence at the science center has made it the most attended museum in the city and one of San Diego’s top 10 attractions, noted San Diego City Councilmember Sherri Lightner.

On Thursday, she named March 10 as the official 40th anniversary of IMAX in San Diego.

Today there are 700 IMAX theaters in more than 50 countries. Outside of the United States, China is its biggest market, with 100 theaters.

“And the fastest growing, by a long shot,” said David Campbell, senior vice president of corporate theater development at IMAX. “In a year and a half, I’m sure we will be over 200.”

To devise a list of companies worthy of meeting with IMAX, a CommNexus team sifted through a number of applications from companies around the world that were itching to show off their technologies to IMAX executives.

“As far away as Hungary,” said Moore.

On Feb. 6, the IMAX executives' schedules were packed with back-to-back meetings with companies at the downtown EvoNexus incubator.

Companies lucky enough to score a face-to-face meeting with IMAX executives get one hour to explain how their technology can help IMAX.

“We do sort of everything, from shooting movies and producing movies and touch a lot of it right from that point until it’s projected in theaters. So there are a lot of technologies in that chain," said Campbell.

IMAX takes Hollywood movies and repurposes them via a digital re-mastering process that sharpens images and removes film grain to result in a clearer picture on the cavernous, up-close-and personal IMAX screen.

“A few companies yesterday had technologies that will help our process we’ve developed," said Campbell.

IMAX is working on developing a digital camera for high-resolution capture.

"There were a couple companies with technology that might be helpful in that area,” Campbell said.

Bellevue, Wash.-based Innovega Inc., which has an office in San Diego, is trying to develop glasses with cameras that project on the lenses, letting users watch a movie or experience augmented reality while walking around.

“We are looking at sort of moving beyond our core business of theaters and exploring those types of ideas,” said Campbell, who met with Innovega on Wednesday.

No signed contracts are made this week, but if IMAX executives think a company's technology is worth pursuing, they will follow up to ink a deal.

In addition, IMAX is trying to capitalize on the fact that its brand is so well known.

“Can we use it to translate that into something more in the home? So we are looking at lots of opportunities like that," said Campbell.

IMAX is the second Canadian company to participate in the MarketLink program. A couple years ago, BlackBerry, which was then known as Research in Motion, took center stage.

“We’ve seen how [BlackBerry] has struggled, as it failed to innovate over the last couple years," said Fransen. "Now we are seeing it trying again to do that. The relationship with San Diego has been at the heart of that development.”

Some other companies previously featured in the MarketLink series include LG and Samsung. There are always applications from Canadian businesses to meet with featured MarketLink companies, “without exception,” Moore said.

Meetings with IMAX executives continued on Thursday at Legend3D's headquarters in Carmel Valley.

The company, which converts blockbuster films from 2-D into 3-D, is making headlines this week with its release of "Top Gun" in IMAX theaters on Friday.

Thursday's breakfast attendees, which included Legend3D's founder Barry Sandrew, got a backstage pass to view the brains behind the San Diego dome: a small projection room.

Film travels 6 feet a second, so an employee has to man the operation at all times in case a problem arises.

To liven up submarine-type space, the room has been painted white and plastered with posters of IMAX films.

Hanging in the corner is one of "Everest," the first ever IMAX-format film on the world's highest peak that documents a deadly 1996 expedition.