Sixteen years ago, Linda Thomas-Mobley led the construction of the Olympic Village at the 1996 Summer Games in Atlanta.

The job fell into her lap after she was hired as a volunteer on the Olympic Committee, but turned into a full-time gig when the director of construction, her boss, was fired.

“It was supposed to be a boondoggle for free tickets,” joked Thomas-Mobley, who decided to cut her hours at the real estate law firm where she was working just to be a volunteer at the 1996 Olympic Games.

Thomas-Mobley was given the torch to lead the construction in part because she had already been volunteering on the Olympic Committee since 1995, and because of her law degree, background as a lieutenant in the U.S. Navy Civil Engineer Corps, and her bachelor’s and master’s degrees in civil engineering from the University of Florida.

She hired and directed designers, project managers, a handful of student workers, event planners and thousands of construction workers to amass the 270-acre Olympic Village on the campus of Georgia Institute of Technology in 28 days.

It had dining areas, service centers, meeting spaces, housing, security, an infrastructure of utilities, practice and training venues, temporary competition venues like the aquatic center, and entertainment areas like coffee shops and dance halls for the athletes.

“What we did was separate the permanent structures, permanent construction, stuff that was going to stay in the ground from the temporary construction and then pull all the [temporary fixtures] out … and hand it back over to the school," she said of the process to construct and deconstruct the Olympic Village, which was part of the Olympic bid agreement. 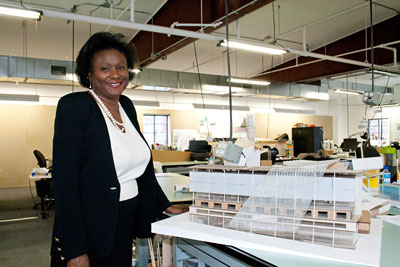 Now Thomas-Mobley has taken everything she has learned and is leading the NewSchool of Architecture and Design construction management program as its chair.

After a national search, she was hired to create and fully develop the construction management program from scratch in 2010, to give students the opportunity to receive their bachelor’s and master’s.

“Linda brought the qualifications, experience, leadership and personality to start and lead this project,” said Steve Altman, president of NewSchool of Architecture and Design.

Altman and Thomas-Mobley wanted the ideal construction management program, one that was different from other universities and would set a standard.

The goal of the program is to give students an interdisciplinary foundation of science, architecture and engineering, along with hands-on and real-world learning via internships, efficient construction projects and public speaking presentations.

Thomas-Mobley said the program tries to be different by requiring Spanish as a foreign language and by teaching students skills like leadership, networking, global perspectives, building in urban areas, retrofitting and remodeling by using existing structures.

“Statistics show 80 percent of the buildings that will exist 25 years from now are already here, so students need to be aware of adaptive reuse and not the basics of a new [construction],” said Thomas-Mobley, who received her doctorate from Georgia Tech in 2000 and worked for 13 years there, the last three as associate chair of a building construction program.

NewSchool’s construction management program has teachers who currently work in the construction industry, are experts in their particular field and want to give back.

“What I look for in faculty members are people that have some value to add that is not in a book,” said Thomas-Mobley, whose father was in the U.S. Army Corps of Engineers.

She also wants the students in the bachelor’s program to come out with a full grasp of new technology and the tools to fully build in a virtual world, because construction is heading more and more toward building information modeling.

“I want my student to be savvy, global, able to communicate with the work force, able to lead, and to understand when things go wrong [that] it will be OK and they can envision a different future and motivate people to get to that different future,” said Thomas-Mobley, who was the second African-American woman to receive a bachelor’s degree in civil engineering from the University of Florida. Her best friend was the first.

Jake Jaenicke, a third-year undergraduate student at NewSchool, said he likes that the construction management program uses current buildings as examples and how teachers like Thomas-Mobley challenge students not to be followers or even middle of the pack, but leaders.

“She is really good about praising you when you do something well because you want that feedback that you are doing a good job,” Jaenicke said. “And when you are not doing so hot, she is really good at giving us options and [showing] us to think, on our own, to find solutions.”

Keeping in line with being different, NewSchool’s master’s degree in construction management is offered entirely online and can be completed in as little as one year.

The program places particular emphasis on developing skills as a business manager and is designed to prepare graduate students for the construction trade’s current and future challenges.

Construction management instructors come from around the world and teach courses that focus on the integration of sophisticated construction technology with management, business planning and professional ethics, with a strong focus on sustainable design, integrated project delivery and practice-oriented learning.

“We have a teacher from Saudi Arabia, the East Coast,” said Thomas-Mobley, who was stationed in San Diego during her time in the U.S. Navy Civil Engineer Corps. “My goal is to have students and teachers from all countries and interacting online because the technology is there.”

NewSchool’s construction management program also has a board of directors, which comprises contractors and architects who advise students and help them find jobs.

On that board is an executive whose construction firm is building two Olympic venues at the 2012 Summer Olympics in London.

Thomas-Mobley said it was refreshing to hear that the feedback she gave the Olympic Committee, including lessons learned from her experiences as the construction manager at the 1996 Summer Games, was put into practice.

“When I found out that they wrote the contracts differently than how I wrote them, I was like, ‘good,'” she said of the papers she wrote to future Olympic committees, hoping someone would learn from what the 1996 team did and didn’t do, and what to do with venues and the Olympic Village once the Summer Games are over.

With a little more than a month until the opening ceremony of the 2012 Summer Olympics in London on July 27, construction of the Olympic and Paralympic Village for athletes is complete.

It has housing for approximately 16,000 athletes, along with shops; restaurants; medical, media and leisure facilities; and large areas of open space. The Olympic Village is designed to turn into a mixed-use complex so it can still be used after all the medals are won.

Thomas-Mobley said constructing the village is like making a city for approximately 30,000 people, with around half being just for athletes and full-time residents during the two-week-long Olympic Games.

“This was one of the most exciting projects I have ever worked on,” she said of the 1996 Olympic Games in Atlanta, “because it was so fast-paced.”