By TONY LOVITT, Special to The Daily Transcript
Thursday, October 25, 2012

When in 1938, LeRoy Neville Baker paid $4,000 to purchase the Dietrich Electric Shop in Escondido, he could hardly have imagined that the company he founded, Baker Electric Inc., would still be thriving nearly three-quarters of a century later, with his great-grandson, Ted Baker, its president and CEO.

Still one of the most respected names in the Southern California electrical contracting industry, Baker Electric's highly diversified customer base includes Hewlett Packard, General Atomics, Valley View Casino and the Palomar Medical Center, among many others.

Baker joined the company in 1994 and became president in 2000, inheriting the helm from his father, Kent, who had assumed the reins from Baker's grandfather, Neville, son of the founder, LeRoy. Thus, four generations of the Baker family have run Baker Electric, each achieving greater success. Remarkably, despite a tough economic climate, Baker Electric achieved a 75-percent growth in revenue from 2009 through 2011, according to Baker.

"Through our quality work, sound business principles and the way we treat our customers," said Baker. "One of the cornerstones of our business is our people's dedication and commitment to not only meet, but exceed, the demands of our customers in an ever-changing construction environment." 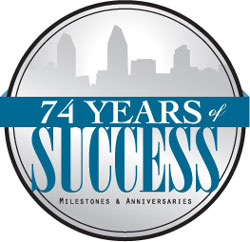 In addition, diversification continues to be a key element of Baker Electric's success. It's a major reason the company has survived the many recessions that severely impacted the construction industry since the company was founded, according to Keith Fleming, vice president of pre-construction. Fleming has been with Baker Electric for 25 years.

"Maintaining longstanding relationships with our customers over the years is the life blood of Baker Electric. If you go back to the 1980s, Baker Electric was doing everything from wiring houses to high-voltage distribution work for SDG&E," said Fleming. "Being diversified and ahead of new markets and industry technology has always been a Baker priority."

"We're currently active in the military, education, health care, technology, manufacturing, hospitality, Indian gaming and multifamily housing industry sectors," said Baker. "Integrating change for growth into our business model over the years has been a challenge, yet an approach that has served as the foundation of our success and ability to weather downturns and take advantage of more prosperous times."

Baker Electric has effectively met the challenges presented by rapidly changing technology, including the need for ongoing technical training and demands for renewable energy sources and related technologies. 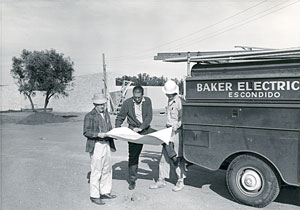 "With BIM (Building Information Modeling) now integrated into projects, this new technology increases efficiency and productivity of the construction process. In response to the growing demand for renewable energy, we are very active in solar across the Baker Electric family of companies. NB Baker Electric Inc.'s launch of Baker Electric Solar in 2007 has extended our reach beyond large commercial to light commercial and residential," said Baker.

In addition to keeping pace with technology, keeping involved with the community is equally important to Baker Electric. The company has a longstanding tradition of altruism, including a relationship with the Boys and Girls Club of Escondido that was established by Baker's grandparents, Neville and Helen Baker. Junior Achievement, Operation America Cares, Shakti Rising and Casa de Amparo have been among Baker Electric's other beneficiaries.

There's no telling what the next 74 years have in store for electrical contractors, but if the last 74 years are any indication, one might bet that the Baker Electric family businesses and its nearly 400 employees will more than capably handle a broad spectrum of industry, economic and environmental changes and challenges.