2012 was a big year for commercial real estate, as several hotels were sold and changed ownership and area malls responded to pressure from Internet retail sales by renovating their properties. In the construction industry, the public sector saw more of the spotlight as projects dealing with government-approved developments or tax payer-funded work made the front page more often in 2012.

Maryland-based LaSalle Hotel Properties’ $76.9 million purchase of the 120-room L’Auberge Del Mar in December broke records for hotel acquisitions in California last year. At a cost of $640,000 per room, it was the most paid in the state last year, and the second highest price ever paid in San Diego according to Atlas Hospitality Group, which tracks statewide hotel sales. The 4.5-acre ocean-view resort commanded a high price due to its premier location and an extensive $25.8 million renovation completed in 2008. LaSalle also owns the Hilton San Diego Resort on Mission Bay and the Hilton San Diego Gaslamp Quarter.

Limited housing inventory (due to a lack of new construction and the declining number of distressed properties on the market) combined with low interest rates drove pent up buyer demand, signaling an inflection point in the regional housing market. November home sales hit their highest levels in seven years. Single-family resale homes, which represent two-thirds of activity, reached a median $390,000, the highest since July 2008 according to DataQuick. The company attributed increases in prices and sales to a growing demand for higher-priced homes and a reduction in available foreclosure properties.

Torrey Garden Hills LLC purchased a 13.5-acre vacant property in Torrey Hills for roughly $39 million with the intention of carrying out the previously approved plan to build 384 condominiums. The development will be operated long-term as apartments, and include 4,000 square-feet of retail space to accommodate neighborhood service tenants. Excavation of the parking garage, which serves as a platform for the residential units, is ongoing according to Dee Snow, who manages forward planning for the developer Garden Communities. Snow estimated the four-story project would go vertical this spring.

In April, demolition on a portion of the historic San Diego Farmers Market Building commenced to make way for a Walmart Neighborhood Market, the first of its kind in San Diego.

Citizens and community groups of Sherman Heights were furious, because they were told the historic building would not be partially knocked down. 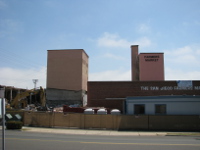 The old Farmers Market building in Sherman Heights is being revamped into a new Walmart.

The 45,800-square-foot Walmart Neighborhood Market was slated to open in the fall of 2012, but as of press time is still under construction.

On July 9, after six heated hours of public comment at City Hall, the San Diego City Council voted 6-1 to in favor of a plan to revamp Balboa Park’s Plaza de Panama.

The project calls for the construction of a bypass bridge from the eastern end of the Cabrillo Bridge, looping around the edge of the park and feeding into a new below-ground, pay-to-park garage.

A pedestrian-friendly courtyard and 6.3 acres of parkland will be built on the roof of the new garage and in the plaza area now occupied by a parking lot.

A rendering of the plan to update Balboa Park's Plaza de Panama.

The project will cost $45 million. The city needs to issue $16.5 million in tax-exempt bonds to fund building the $14 million parking garage. Qualcomm founder Irwin Jacobs has pledged to fund the rest of the project.

This plan was met with opposition because of the amount of city funds that would be needed for the project, the redesigning of the park and for the privatization of a parking garage.

After a decade of the city of Chula Vista wanting to redevelop its waterfront — and the back-and-forth legal actions and denials for approval — the California Coastal Commission approved the Chula Vista Bayfront Master Plan.

The plan will allow the city, along with the Port of San Diego, to revitalize 556-acres of land west of Interstate 5 between state Route 54 and L Street.

Over the next 24 years, the city’s waterfront will be transformed to include three hotels; a conference center; 1,500 multifamily housing units built by Pacifica Cos.; two RV parks; restaurants; a mix of office and commercial buildings; and 238 acres of open space that will include 130 acres of public parks, trails and bike paths, and buffers that will protect sensitive habitat. The proposed buildings would have a maximum height of 200 feet.

On Oct. 1, the San Diego City Council was also involved in another controversial approval. By a vote of 7-1, the council voted to approve the $520 million expansion of the Convention Center. It will be funded through an increase in hotel taxes.

In addition to approving the financing plan, the City Council also approved the project’s environmental impact report and contracts to issue the bonds for construction of the project.

Opponents of the expansion said the Convention Center does not need to be any larger, since it only fills up during a handful of events such as Comic-Con.

There is also concerns of the structure of the tax, which groups city hotels in three levels based on their proximity to the Convention Center, with those closest levying the steepest tax.

Council member David Alvarez said many hotels away from downtown won’t derive any benefit from the expansion.

A Project Labor Agreement was also agreed up for the work associated with the expansion of the Convention Center.