New venture increases focus on design, inside and out

In 2011, Armando Flores set the foundations for a new company. In 2012, he took the new company and made it a business.

As owner of Charco Design & Build Inc., Flores qualified for his general contractor's license early in the year, completing his transition from being a designer at Charco Construction Co. Inc. to building a new company focused on his strengths.

Those strengths have been apparent to anyone who has seen his work, or even his personal interests. A 1989 graduate of Platt College with a degree in architectural design, Flores brings to his game something not always seen in heads of design firms: a keen sense of interior design, which he bolstered alongside his degree work through online classes.

For him, it’s about the creation of the space. A self-described lover of fine art and old Ferraris, Flores’ love for the lines is hard to escape when looking at his designs, let alone his side project as the creative director for the San Diego Collection — a collection of rare and exotic cars. 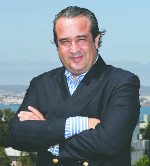 “I think between the architecture, the art and the art of cars, everything has almost the same lines,” Flores said.

One client, whose remodel consisted of razing a Point Loma oceanfront home and replacing it with Flores' design, had Flores design for him an artistic combination of changes that included a bamboo stairway free of supports, a barrel-vault ceiling, a shower with multi-directional sprayers and what ended up as a melding of two ideas for the kitchen, since the client couldn’t choose one over the other.

Despite having a flair for the fancy, Flores isn’t one to turn down smaller projects when they fall in his area of expertise, and he appears to have a knack for creating something big from modest beginnings.

“This type of work is not something that one day after another you decide to do just high-end jobs,” Flores said. “It takes a lot of patience.”

For Flores, the patience has paid dividends in solid client-designer relationships.

In describing the relationships he's built, he recalled times when he was on jobs for months, and how it’s impossible to not develop a bond with clients. At times, the bonds were like those with his own family, Flores said.

Being a company owner doesn't keep Flores from pouring himself into each project undertaken, he said. Taking pride in being a part of the process, being focused on creating a space that fits the budget of the client while achieving what the client wants, has proven to be his reward.

“It's just being proud of something you designed,” Flores said.