NAIOP tells members to pack their bags for a good cause

NAIOP San Diego, the commercial real estate development association, will take its seven-year philanthropic relationship with the 1st Marine Special Operations Battalion based out of Camp Pendleton to a new level this year. The association is throwing a Suitcase Party, with proceeds going to the Marines Special Operations Command (MARSOC) Foundation.

On July 19, NAIOP members and guests, as well as members of the 1st Marine Special Operations Battalion, their guests and representatives of MARSOC, will gather at McClellan-Palomar Airport at a private Premier Jet hangar for a black-tie dinner, chart-topping entertainment and drawings for luxury getaways.

The real show-stopper of the night promises to be the grand prize drawing, a private jet whisking two lucky guests off for an exclusive Napa Valley getaway. Attendees will bring a packed bag and listen for their name to be called over the hum of a private jet engine at the end of the evening for an exclusive boarding announcement.

NAIOP San Diego President John Garrigan, whose company, LBA Realty, along with NetJets, contributed the grand prize. “We can never fully repay our Marines and their families for their selfless service and sacrifices, but we are proud that NAIOP and its membership have given generously of time, attention and funds to support these brave individuals and their families over so many years,” he said. 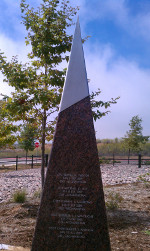 A memorial at Camp Pendleton for fallen Marines dedicated by NAIOP. Photo by Jaime Murray

The MARSOC Foundation was established to provide benevolent support to active duty and medically retired MARSOC personnel and their families, as well as to the families of Marines who have lost their lives in service to our nation. The foundation, a national nonprofit, provides essential awareness and support for these brave men and women, including rehabilitation, vocational and commemorative services and dedicates its efforts to providing those services unmet by the government and other organizations.

As Capt. Matthew H. Lampert, team leader, Marines Special Operations Team 3, so eloquently said in a video on the Suitcase Party website (sdsuitcaseparty.com): “Losing a limb or being badly wounded, or having a traumatic brain injury, or any number of other injuries or ailments associated with serving in combat, is by no means the end or the stop point of a very long and fulfilling life.”

Lampert lost both of his legs in combat in Afghanistan in 2010. With help from MARSOC Foundation, he was able to return to his unit and his role as executive officer and eventually return to Afghanistan with his company, as he wanted to do.

NAIOP’s association with the 1st Marine Special Operations Battalion at Camp Pendleton began in 2006 with the launch of NAIOP’s Adopt a Platoon program. That year, the association sent supplies to the Marines and Sailors of the battalion overseas and did whatever was needed to help their families back home. Amongst many other helpful acts, NAIOP sent cooling towels to help Marines weather searing desert temperatures, sent a Marine’s spouse to Japan to attend her father’s funeral, and they mourned with one of the platoons when one of its members was killed by an IED.

In 2009, NAIOP added the “Adopt a Marine Buddy” campaign, which gave each NAIOP member interested a specific Marine to adopt before, during and after his or her deployment. Since the inception of Adopt a Platoon, NAIOP’s members have supported the 1st Marine Special Operations Battalion over numerous deployments.

In 2011, NAIOP put its real estate know-how to work to erect a monument at Camp Pendleton to honor fallen Marines. The memorial, which sits in front of the special operations battalion’s headquarters, is inscribed with the names of the Marines of 1st Marine Special Operations Battalion (1st MSOB) who were killed in action.

“We have all gained so much just from getting to know these remarkable individuals at 1st Marine Special Operations Battalion,” Garrigan said. “I think it’s fair to say that we’ve developed a passion for helping to support our troops, and the Suitcase Party will be a wonderful way to celebrate all the wonderful relationships we’ve made while also helping to grow our support.”

While LBA Realty and NetJets have claimed the top-level sponsorships for the Suitcase Party, other opportunities are still available. For more event details, sponsorship information or to buy tickets, visit sdsuitcaseparty.com.