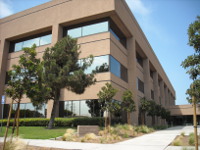 About the property:
Vacant and unsuccessfully marketed for nearly seven years, Jones Lang LaSalle’s Tony Russell and Cassidy Turley’s Phil Linton knew that a complete turnabout was needed to market South Bay Corporate Center. Although vacant, this building was leased to a full building tenant until two-and-a-half years ago. Soon after the lease expired, the ownership entity went through some restructuring, and the newly-formed SPO Holdings entity engaged Russell and Linton to market the building. They performed a full assessment of the building and its amenities, and advised the seller what upgrades would be necessary. Even with the upgrades in place, they were still challenged with selling a vacant office building in a secondary market. Cash flow would be non-existent for the buyer.

Closing the deal:
Once engaged, the brokerage team developed a new sales strategy, including re-branding, remodeled lobby and common areas, new hardscape and landscape. They then marketed the building for sale or lease to full-and partial-building users looking for large floor plates, a generous parking ratio, proximity to downtown and the U.S./Mexican border, freeway visibility, public transportation and redundant power. Their creativity worked wonders as they were able to create a lot of interest in a short period of time from numerous investors. After a focused effort to secure the highest price from an investor, Russell and his team sold the building to Greenlaw Partners by targeting a local Southern California buyer who would understand the potential of the submarket and the region.

Greenlaw Partners retained Russell as the leasing agent. He carefully considered which companies would want large floor plates (rare in San Diego’s office market) and would benefit from the high parking ratios and proximity to public transit. With several education users in the market for leasable space, Russell approached ITT Educational Services and within three months of closing the sale, he executed a 45,000-square-foot lease with the firm. Greenlaw and Russell are in negotiations with tenants to lease the remaining space.

This series of transactions brought a major educational user to National City, a city that has worked hard to build its commerce base and provide a higher quality of living for its residents. ITT Educational Services also brought additional jobs and critical tax dollars to the National City community.