Characters explode out of the box at new Legoland Hotel

Region's latest resort is one-of-a-kind in US

Since opening in 1999, Legoland California has expanded to include more than 60 rides, shows and hands-on attractions including the only Legoland Water Park in the world, Pirate Shores, the Sea Life Aquarium and Miniland USA, which reproduces seven areas in the United States and is constructed using 20 million Lego bricks.

Since late 2011, construction of a different kind has been under way at the theme park: building of the first Legoland hotel in the country. Thanks in part to the efficiency of a team led by Irvine-based R.D. Olson Construction, the hotel will open April 5, just in time for kids out on spring break.

The three-story, 250-room hotel is sited at the main entrance to Legoland. In the shadow of a giant clock tower, a smoke-breathing dragon made of 350,000 Lego bricks greets guests. Designed for families with children between the ages of 2 and 12, the hotel is awash with child-friendly features from secret whoopee cushions and tight-rope walking marching guards to exploding toy boxes, and a disco-themed elevator complete with flashing lights and a mirrored ball. 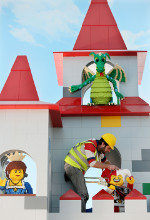 The new Legoland hotel in Carlsbad will be the first of its kind in the country. Photo courtesy of Merlin Entertainment Group

A family of four Lego dragons live in the hotel: the smoke-breathing dragon at the entrance; a young dragon in the lobby who sits atop a handle and slowly spins it to make a Lego river flow; a baby dragon that peers over the ledge of the castle; and an interactive bubble-blowing dragon taking a bath on the patio sprays water and “talks” to young guests.

Behind the reception desk in the lobby, an entire wall is created out of 6,000 Lego Minifigures. In the hotel’s atrium, the knight’s castle (protected by the giant, burping ogre) towers through the clouds. Children can climb aboard and play on the 32-foot tall pirate ship as it docks in the castle’s moat and raise the pirate flag to the sound of blasting canons.

The Bricks Family Restaurant features a menu with kids in mind, as well as a healthy-choice buffet to suit a wide range of tastes. For adults, there’s the Skyline Bar with a “skyline” featuring 35 different city scenes created from more than 200,000 Lego bricks. Other amenities include a fitness room, in-room Wi-Fi, and an event space that can hold 110 people. Outdoors, Lego trees and lounge chairs surround the gradual incline 5-foot-deep pool.

Guests can choose a pirate, kingdom or adventure-themed room. All rooms have two sleeping areas, one with a queen-size bed for adults, and a separate area for up to three kids, complete with a bunk bed, pull-out trundle bed and their own TV for watching in-room movies. In each room, Lego models are tied to the theme and there are clues to unlock a hidden treasure and other surprises.

According to Gonzales, the lowest nightly room rates range from $149 during fall and winter to $209 during the summer, the resort’s high season. A variety of packages that include options like breakfast and park hopper tickets are also available. The hotel’s 51 premium rooms feature additional themed décor and Lego models and cost more than regular rooms. Six rooms have terraces, and some rooms on the second and third floor have an ocean view. Hotel guests will also have exclusive early morning access to select rides and attractions before the park officially opens.

Legoland California is owned by Merlin Entertainments Group, the world’s second-largest visitor attraction operator. It operates 94 attractions, seven hotels and two holiday villages in 21 countries on four continents and employs more than 20,000 people. It currently owns and operates 17 attractions in the United States. Privately held, it won’t disclose how much it spent to build the new hotel, nor does it release annual attendance figures for its attractions; however, the hotel does represent the park’s biggest investment since it opened in 1999.

The City of Carlsbad Planning Commission approved the request to build the hotel in 2009, but according to Legoland California Resort General Manager Peter Ronchetti, other factors, including the economic recovery, were taken into consideration when establishing the opening date of the hotel.

Gonzales said on average 250 construction workers were on site each day during construction and more than 2,500 worked on the project altogether. When operational, the hotel will employ a staff of 250 and is now filling those positions.