Much attention at the San Diego Zoo has been given in recent months to giant panda cub Xiao Liwu, born last summer on zoo grounds. But this summer, the zoo plans on catering to lovers of a smaller variety of cuteness: the koala.

The zoo began planning for the new exhibit — called Australian Outback — about four years ago, according to Steven Fobes, the zoo’s lead architect. The idea grew out of the need for the zoo to keep up with the growth of its koala colony, and to provide more outdoor space for the well-known marsupials.

Zoo spokesperson Jenny Mehlow said the zoo has more than 20 koalas. Many of them are being held off-exhibit as their new home is being built.

When it opens in late May, the new outdoor space will be almost four times as large as what the koalas have had available to them, providing ample room for them to live year-round in the outdoors. They hadn’t been able to do that before, spending much of their time in the old koala barn, Fobes said. 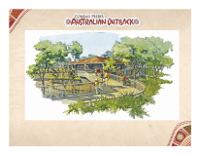 An artist’s rendering offers a glimpse of what the new Australian Outback exhibit at the San Diego Zoo will look like when completed this summer. Image courtesy of San Diego Zoo

Studies have shown, he added, that full-time exposure to natural light is beneficial to a koala’s health.

“Even though we had tried to do things to provide natural light, there just wasn’t enough inside a building,” Fobes said.

The exhibit will contain a mixture of natural trees and plants — including ferns, cycads and other Australian natives — and an artificial tree that will provide both shade and mist for the koalas in the summer. An elevated walkway will meander a few hundred feet through the exhibit, placing zoo visitors at the level of the tree canopies in which the koalas will spend much of their time.

Concentrating on Australian plants and trees, Fobes said the desired effect is for guests to feel as though they are in the middle of a eucalyptus forest with koalas in all directions. Onlookers will be able to watch the koalas from what’s designed as an extended porch of the Queenslander House, another feature of the exhibit meant to give guests a feel for Australia’s backcountry.

The designing of the Queenslander House itself was aided by insider information provided by a few zoo keepers originally from Australia, Fobes said, as well as an assortment of photographic reference material.

“So we had a lot of examples of actual Australian homes to work with,” he said.

There will be no nets, wires or glass separating zoo guests on the elevated deck from the koalas — just the barrier of space.

“Of course, we’ve calculated in certain jump distances and things (like that), to make sure that if the koalas were spooked, they couldn’t jump out or get on the walkway,” Fobes said. “But really, it’s an open-air exhibit.”

According to Mehlow, the male and female koalas will be kept on separate sides of the exhibit, with each of the males separated from each other and given their own trees and perches — since they have a tendency to be a little competitive with other males. Female koalas, she added, are more tolerant of each other’s company, so their exhibit will be more open.

The zoo is in progress on a study of the koala’s use of space, Mehlow said, and the new exhibit will help facilitate that research. In addition to koalas, the exhibit will include Tasmanian devils, wombats, wallabies and a variety of Australian birds in three small aviaries.

While not always open to the public but for its porch, the Queenslander House, Mehlow added, is planned to be used by the zoo’s education department to coordinate classes on topics related to the exhibit.

The two-part, $7.4 million exhibit will begin where the koalas have been located already along the zoo’s eastern fence line, and continue across the road near Sydney’s Grill, expanding toward what is now the Urban Jungle exhibit.

Always thinking in terms of sustainability, the zoo hopes to someday earn recognition from the U.S. Green Building Council for the Australian Outback as a Leadership in Energy and Environmental Design-credentialed site, but for now, Fobes said the exhibit doesn’t fit neatly into any of the LEED categories.