NASSCO to deliver Montford Point in May

General Dynamics NASSCO has completed 97 percent of the work on the Navy’s first mobile landing platform (MLP) vessel, the Montford Point. The ship is set to be christened March 2 and will be delivered to the Navy in May.

The MLP is a new class of auxiliary support ship for the Navy, which will be operated by Military Sealift Command. The vessels will improve the military’s ability to deliver equipment and cargo when land bases do not exist or are not available, and could be used in disasters or major combat operations.

“They give us a transfer point for the Marine Corps to do their amphibious landing, and to go between ships and shore,” Burford said. “It lets us put the equipment at sea so we can hook up with the Marines and bring them to the shore. Usually we do it with bigger ships, but these were built with the Marines in mind.” 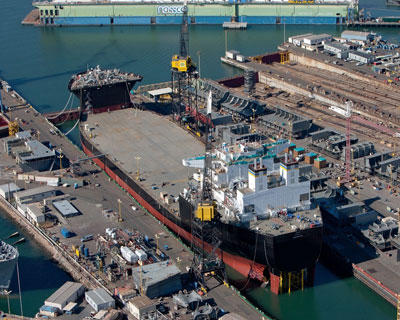 The $1.3 billion contract consists of three vessels. NASSCO began construction on the Montford Point in May 2011, and the ship completed its first float-out operation in November 2012. The name honors the African-American Marines who trained at the Montford Point, N.C., facility during World War II. The ship is expected to be fully operational by fiscal year 2015.

Subcontractors include IMIA, Raytheon, US Joiner and Fairbanks Morse Engine.

The second, the John Glenn, is more than 52 percent complete. Delivery is scheduled for the first quarter of 2014. Construction on the third, the Lewis B. Puller, has begun and the target date for delivery is the first quarter of 2015. John Glenn is the famous astronaut, U.S. senator and retired Marine. Lt. Gen. Lewis B. “Chesty” Puller remains the most decorated combat Marine in Marine Corps history.

Jim Gill, director of public relations and communications for NASSCO, said construction on the Montford Point employs about 2,000 people at the company’s shipyard south of the Coronado Bridge.

“We’re putting together really a very complex ship. There are a lot of skills and knowledge that go along with that,” Gill said. “NASSCO delivers high-quality, mission-ready ships to the fleet and MLP is no exception.”

The Montford Point uses float-on/float-off technology, which allows the ship to be partially submerged, facilitating the movement of cargo and craft. The ship measures 785 feet in length and 164 feet in beam, with a deadweight tonnage in excess of 60,000 metric tons. It has 25,000 square feet of vehicle and equipment stowage space, and storage for more than 590,000 gallons of JP-5 fuel. The vessel has a top speed of 15 knots and a range of 9,500 nautical miles.

The MLP in its basic form supports a vehicle staging area, side-port ramp, large mooring fenders and up to three landing craft air cushioned vessel (hovercrafts) lanes. MLP capability will allow cargo ships like T-AKEs and LMSRs to dock with it and offload equipment and supplies for transshipment to shore by hovercraft or other vessels.

The MLP can also be reconfigured to support a variety of future operations. MLPs will operate with a crew of 34 Military Sealift Command personnel.

Originally conceived by the Navy in 2009, the MLP program was effectively canceled due to cutbacks in defense spending. NASSCO worked with the Navy to create a more affordable design based on the Alaska-class oil tanker, built by NASSCO for British Petroleum (NYSE: BP). The resulting design maintained about 80 percent of the MLP operational requirements at less than half of the original cost, according to Gill, the NASSCO spokesman.