It's been quite a while since a woman last held a seat on the board of directors at the National Electrical Contractors Association -- 10 years, to be precise, since Diane Keltner of Santee’s Synergy Electric Co. did.

After years of service in project management at Par Electrical Contractors, Sommer Adams has become accustomed to turning the tide with regard to old gender role norms. A member on the NECA board as of her January installment, Adams stands with Keltner in a rare class: they're the only women ever to be in that position.

Though not someone who comes off as a crusader, Adams holds visible pride in her ascension at NECA and at Par, where after serving as project manager on projects like the Sunrise Powerlink, she's now the contracting firm’s manager of major projects.

She's put in her time at Par — seven years.

But it's been more than service time that’s raised her stock in the construction industry. 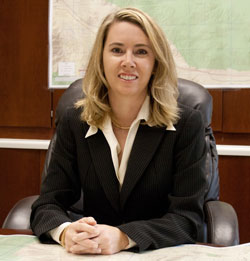 Sommer Adams is one of only two women to ever be a NECA board member. Staff photo by Sarah Strong

Being anywhere in the ranks at an electrical contractor isn't what Adams would have predicted for herself a decade ago. At that time, she was working as an electrical engineer in La Mesa after earning her bachelor’s degree in mechanical engineering from the University of Southern California.

“I would say I used to write specs, and now I read them,” Adams said.

Going to USC, she thought she'd wind up an aerospace mechanical engineer, or something along those lines.

But following school, and looking to do “anything just to be in San Diego,” near her family, she took a job that opened locally. She didn't know at the time that even then, as an engineer, she was involving herself in projects that primed her for much of what she does today on the contracting side.

The engineering firm she worked at, Turpin & Rattan Engineering, needed someone to coordinate utility work, she recalls. That work involved utility design for Adams. From there, she said, she “kind of fell into the electrical side.”

Add to that a familial history with contracting and the possibilities broadened.

“I always thought I'd be an engineer,” she said. “But my father’s a contractor, and that’s probably how I ended up working for a contractor, to be honest.”

In terms of how being a woman fits in the picture, Adams said that on the contacting side, she's more “exposed.”

“You have to joke with (the men), and you're a little bit more vulnerable.”

Adams doesn't shy away from acknowledging the intimidation she felt early on.

“Absolutely,” she said. “When I was at the engineering firm, I think I remember going up and here was a crew -- I was really young. There was a field condition, and they're going, ‘she’s going to tell me how to do this?’”

But through the years, she hasn't allowed that vulnerability to become a liability.

Part of the job, she said, is about building trust. Steering away from approaching the job with an overly-domineering mindset, she said she's instead learned to build support for her role by allowing her workers to feel like they're a part of the process.

She recalls responding to the crew members questioning her ability long ago by asking how they would solve the field condition. That set a tone for what would become her management style in an industry dominated by men.

“I knew what the solution was, but just asking the questions -- it's a lot like being married.”

While organizations like the National Association of Women in Construction, and even NECA, have worked to promote women's roles in the construction fields, Adams said it’s still not common to see women in powerful or technical positions at firms.

But she does see the field becoming more accepting of it.

“The project I have now, I have a female equipment manager and a female scheduler,” Adams said.

Both of those positions are technical, she added.

“You have to understand what the construction is doing, where the crews are going and balancing the crews,” she said. That means knowing which workers and machines are needed where, based on their skill sets or purposes.

A member at NECA for several years now, Adams said some in the NECA leadership have for a while been pushing for her election to the board. NECA President Tim McBride, Adams said, approached her following a couple of vacancies in the past to let her know that they considered her for the spot, and that her time would come.

When asked what she sees in herself as the qualities that got her elected in 2012, she sums them up by describing her deep involvement in the organization. Before her election, there was a joke that circulated the room every time there was a vote by the organization, Adams said.

“All board members here -- and Sommer,” she recalled the NECA leadership joking.

The management opportunities are abundant for women in her field, Adams said -- if they aim for them. Viewing women as excellent multi-taskers, they are a natural fit for dealing with the mix of construction schedules and dynamics on the job, Adams said.

For Adams, each new project starts with the demanding tasks of its setup. Creating contingency plans is a part of the welcomed challenge. It's trying to anticipate what might happen, and mitigating those risks, Adams said.

“Hopefully, you're right,” she added. “If you’re wrong, then you deal with it as it happens.”

The job could keep her out from 6 a.m. until 11 p.m., five or six days a week. She could be up after hours at home, typing a submittal or response to a client, or thinking of the challenges that await her in just a few hours, she said.

It's not what she expected years ago, and people complain sometimes about the hours and the stress.

“But that's what we love, because it’s different every day.”

And for someone like her, who loves solving problems, that's not a problem at all.

Sommer this is so awesome. Congratulations.