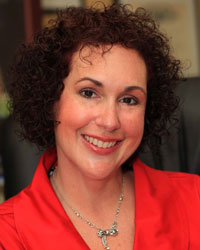 Before she became a family law attorney, Myra Fleischer had to attend to some family matters of her own.

"I wanted to be a lawyer since I was a young girl," she said. "I planned to earn a business degree first and then go to law school. But due to the huge challenge I faced putting myself through college, I took my undergraduate degree instead and ended up working in accounting.

"I never wanted to give up on my educational dream, so I applied to law school several years after college and was accepted on the East Coast. Before I could start, though, my now-husband Charlie proposed and asked me to follow him from Philadelphia to Tucson, Ariz., so he could complete his medical residency. It was the hardest decision of my life to give up the law school acceptance, but also the best."

Fleischer continued to work in accounting and gave birth to her oldest son, Nathan, in Arizona. When the family relocated to San Diego, she applied again and was accepted at Thomas Jefferson School of Law. At the same time, she and her husband wanted more children. The next pregnancy was planned around her school schedule, but she miscarried while taking her first final exam, barely finishing before ending up in the emergency room. When the first semester was over, half the class had either flunked or dropped out, but not Fleischer.

Following this challenging start, she gave birth to son Jordan and daughter Sara while attending and successfully finishing law school in three years, ignoring the advice of doctors and attending class despite difficult pregnancies and with newborn children in tow. "Nothing was going to deter me from getting my law degree this time," she said.

Affairs of the heart have impacted Fleischer's life from the start. She was born on Valentine's Day into a high-achieving Philadelphia family, and said expectations for her were always high. She was the fourth child and only daughter of two pharmacists. Her mother was her first female role model.

"She only stopped working full-time after her third child was born, spending many years in a so-called ‘man's profession' long before anyone had ever heard of women's liberation," she said. "My father suffered from poor health due to his heart, and it caused a financial strain on the family. He suffered his last heart attack the week I took my first college final exams as a freshman. That meant that my three older brothers, one a college sophomore and the other two in medical school, and I needed to move forward as young adults with only one parent's support to finish our educations. Through scholarships, loans and working — two jobs, in my case — all four of us did."

After graduation from law school and passing the California bar exam, Fleischer worked for another firm for several years before launching her own practice in September 2001. She hired her first employee two years later. The firm continues to grow and develop new partnerships to offer integrated legal services, with a focus on divorce, custody, support, division and agreements.

She said the winding road that led to her current role as a family law attorney is responsible for her aptitude and success in the field. She is a Certified Legal Specialist – Family (CLS-F) – a designation from the California Board of Legal Specialization bestowed on attorneys who have met certain qualifications and uphold standards of practice established by the Association of Certified Family Law Specialists.

"Family law is more challenging than ever," Fleischer said. "We stand at the intersection of social changes such as same-sex marriage, scientific changes such as assisted reproduction, surrogate parenting and such; and the technology changes affecting every aspect of our lives. Together, they all have a tremendous impact on our ideas about what it means to be a family. As family law attorneys, we must help the law catch up so it addresses the real needs of these families today."