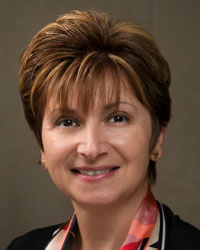 When she was growing up, Tamara Badkerhanian-Ganev had very little doubt her career would be in engineering.

"My father is a fire engineer, which means an airplane-crash expert. My older brother is an electrical engineer. And I grew up breaking down radios to see how they work. So it was genetic," said Badkerhanian-Ganev, president and CEO of BSE Engineering in San Diego.

Born in Iran to Armenian parents, Badkerhanian-Ganev's family fled the Islamic Revolution in 1979 and settled in Vancouver, B.C. Pursuing her calling, she received an honor's diploma of technology in mechanical engineering with a specialization in building services, from British Columbia Institute of Technology, after exploring a degree in robotics in Victoria, B.C. She remained in Canada until 1997, when she and her husband relocated to San Diego "to raise our little daughter in a warmer and more moderate climate."

She also wanted eventually to have her own business. That dream is now BSE Engineering, which she proudly proclaims on its website as "A Woman Owned Full-Service Engineering Firm — Designing Your Sustainable Future."

"When I moved here, I got hired by a company that no longer exists," she said. "I left a partnership offer to start my own firm on April Fool's Day 2005 under the name Alliance Consulting Engineers. I acquired managing shares of BSE in 2009 and merged all operations. BSE was electrical only, Alliance was mechanical and energy engineering. Now we do all of that and more."

Badkerhanian-Ganev is passionate about helping clients identify and develop energy-savings programs, and secure energy-savings performance incentives through partnership programs with utility companies. Those incentives have totaled more than $1 million to date.

She lists her greatest achievement of 2012 as the completion of a campus-wide energy-efficiency program for College of the Desert in Palm Desert. Through BSE's efforts, the school has received nearly $600,000 in energy-savings incentives through the California Community College Investor-Owned Utilities Partnership Program.

"Every step of the way, we consider the environmental impact of the project and the lifecycle cost benefits of the decisions that are made," she said. "Total cost of ownership doesn't mean how much a project costs to construct, but also what it costs to keep it running."

BSE also guided seven desert-area jurisdictions in benchmarking their utilities, which helped them adopt decisions that encourage energy efficiency. The program will help the participating members of the Coachella Valley Association of Governments reduce their carbon footprints.

Badkerhanian-Ganev confesses to being outspoken about women's roles in business. She said her mother used to tease her about being too opinionated for her native Iran.

"I believe in women's rights issues and gender equality," she said. "We have come a long way and right now, here in California, all things are possible. My advice to women is to be more optimistic and to recognize that sometimes the only person getting in the way of our success is ourselves and our limiting beliefs."

Practicing what she preaches, Badkerhanian-Ganev she is 2012-13 board president of the San Diego chapter of the National Association of Women Business Owners. The organization represents more than 10 million women-owned businesses across the United States. Its mission is to help women improve their companies through a series educational programs, networking and policy discussions. Before becoming chapter president, she was public policy chair.

Her leadership role has paid off for BSE Engineering. In the year ahead, Badkerhanian-Ganev looks forward to continued company growth. The firm has outgrown its offices in Kearny Mesa and she is negotiating a lease for a larger facility.

"It comes from pursuing projects wholeheartedly, doing what you love to do and being good at it," she said. "The whole reason I started my own company is to prove to the world that you don't have to make moral compromises to succeed in business. We've never taken any shortcuts and I believe the results speak for themselves."