Ellen C. Revelle made a better San Diego for all

Ellen Virginia Clark Revelle was a dedicated San Diegan who, until her death in May 2009, used her considerable resources of mind, wit and fortune to make San Diego a better place for all.

Born in the La Jolla guesthouse of her great-aunt Ellen Browning Scripps in 1910, Ms. Revelle grew up largely in Pasadena, visiting La Jolla frequently with her family.

After graduating with the first class from Scripps College in Claremont, Calif., which had been founded by her great-aunt, she married Roger Revelle, who would go on to become one of the nation's most prominent scientists and is credited with discovering global warming.

Through her marriage to Roger, Ms. Revelle traveled a great deal and lived around the United States and beyond. Her wise counsel provided an anchor for her husband during his long, distinguished career; her loving support nurtured four children, 12 grandchildren and 18 great-grandchildren.

In 1931, Ms. Revelle set up her first household in one of the cottages on the cliff a bit north of her birthplace at Scripps Institution of Oceanography at University of California, San Diego (SIO). Her role in the evolution of SIO and the founding of UCSD began there and continued until her death. 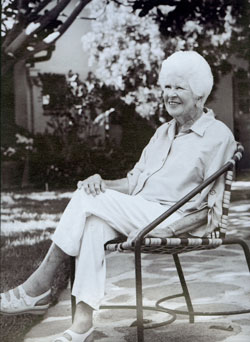 Dr. Tony Haymet, the former director of the Scripps Institution, called Ms. Revelle "the First Lady of Scripps," and said she was a huge help in persuading foreign scientists to come to the institution.

"Ellen was the welcomer and the fixer and the matriarch at Scripps," Haymet said in an interview with The Daily Transcript at the time of Ms. Revelle's death.

Ms. Revelle remained an active participant in many organizations through her late 90s, including Revelle College at UCSD. She regularly attended school banquets and annually held a spring tea on her front lawn for the school's female graduating class. The school would bus approximately 150 women to her La Jolla home.

"There was a beauty to it that our students felt a part of the tradition and a connection to the founding days of the college," Daniel Wulbert, former provost of Revelle College, said in a 2009 interview. "She was an engaging person in an intellectual and delightful way. Students would clamor around her."

Wulbert recalled a particularly fiery introduction she delivered for former Vice President Al Gore during an appearance at the school around 2007. It prompted rousing cheers and laughter from the audience of 5,000.

"You knew that she had gotten older and yet, when you talked with her, you were surprised that you were talking to an active mind," he said. "Students were always thrilled to sit with her. She was still a very sharp person."

Though Ms. Revelle met and even sometimes entertained dignitaries like Eleanor Roosevelt, John Steinbeck and Jonas Salk, her children said she acted in the same warm, gracious manner with everyone.

Her children said her philanthropy widely reflected her interests: music, theater and art. She also loved reading, writing and keeping up with current events. She swam almost every day in the summer in La Jolla Cove until her mid-90s.

Chamber music enthusiasts will continue to enjoy the "Revelle Series" each year thanks to her generous gift to the La Jolla Chamber Music Society. She was also a major supporter of the San Diego Symphony and the San Diego Opera.

Higher education was another focus of her interests. She was an active board member of her alma mater Scripps College for 50 years, and she and her husband endowed the James E. Scripps Scholarship at the school in honor of her grandfather. She and her family endowed a chair in environmental science and policy at SIO. She and her family also provided funds to the American Association for the Advancement of Science to support a fellowship in international science policy.

She devoted her considerable energies to tackling problems that threatened her beloved community. This included leading a successful campaign to preserve beach access and donating Wisteria Cottage to the La Jolla Historical Society for its headquarters. She and her husband were early supporters of theater in La Jolla, and they helped found the La Jolla Playhouse, where she later served on the board.

Ms. Revelle received many awards during her distinguished life, including the Ellen Browning Scripps Associates award in 1990, the UCSD Foundation Medal in 1995, the Women's International Center Living Legacy Award and the UCSD Revelle Medal in 1996.

Ms. Revelle was also the publisher emerita of this paper and frequently offered her comments and suggestions for its improvement and expansion.