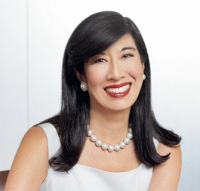 Andrea Jung, former CEO of Avon, has just been nominated to Daimler AG's supervisory board. Photo courtesy of Avon/Bloomberg

Jung, who remains a senior adviser at the U.S. cosmetics producer after leaving as CEO almost 11 months ago, is designated to succeed Lynton R. Wilson when his board term expires, Stuttgart, Germany-based Daimler said Wednesday in the official invitation to the annual shareholders meeting in April. Investors will vote on Jung and the re-election of current board members Sari Baldauf and Juergen Hambrecht at the session.

“Due to her very varied past activities, Andrea Jung has excellent management and market knowledge,” particularly of North and South America and Russia, Daimler said in a separate statement. “Furthermore, she has extensive expertise in sales and marketing strategy, as well as branding.”

German corporations are under pressure from the government to increase women’s participation in their decision-making. Chancellor Angela Merkel said in December that she was losing patience with companies’ pace of appointing female managers and directors. Daimler, the maker of Mercedes-Benz cars, said in its 2012 annual report that it’s targeting 20 percent representation among its senior executives by 2020.

Jung, 54, ran New York-based Avon as CEO from 1999 until April 2012, and was the first woman to hold the position at the cosmetics retailer, which specializes in door-to-door sales. Her background is in marketing, and she touted Avon, which has a largely female sales force, as “the company for women.”

Avon announced plans in December of 2011 to replace Jung as CEO as the company grappled with slowing sales and possible bribery law violations oversees. Jung initially remained the chairwoman, during which time Coty Inc. (Nasdaq: COTY) failed in an effort to buy Avon, before relinquishing that role at the end of last year. She currently sits on the Apple Inc. (Nasdaq: AAPL) and General Electric Co. (NYSE: GE) boards.

Baldauf, formerly head of the networks division at mobile-phone maker Nokia Oyj, and Petraea Heynike, who ran the unit including the Nespresso coffee brand at Nestle SA, are currently the only two women on Daimler’s supervisory board, holding seats selected by shareholders. Daimler said in its annual report that “several women” have been nominated to labor-representative posts on the board, with workers scheduled to vote on those seats in March.

Under German corporate law, listed companies have a supervisory board, which oversees and appoints the separate management board, which includes the CEO and is responsible for day-to-day operations and strategy. Labor and shareholder representatives have an equal number of supervisory board seats.