By Tony Lovitt, Special to The Daily Transcript
Thursday, February 28, 2013 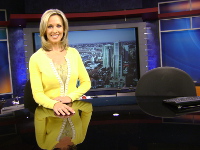 Barbara-Lee Edwards exudes happiness. Who can blame her? After all, the KFMB-TV news anchor has her dream job, works with people she really likes, and lives with her husband and two children in a city her heart has desired since she first visited here as a child. Plus, it's 1,538 miles and more than a few degrees on the thermometer from her previous TV gig in frosty Winnipeg, Manitoba.

Edwards was born, raised and started her broadcasting career in Vancouver, B. C. A graduate of Simon Fraser University and the British Columbia Institute of Technology, Edwards subsequently worked at the Global Television Network affiliate in Saskatoon, Saskatchewan (where she met her husband, Curtis, a photojournalist) and spent six-and-a-half years at the CTV affiliate in Winnipeg. She joined the News 8 team in 2001.

The opportunity to work in a larger market and enjoy warmer weather and coastal scenery were definitely alluring, Edwards said.

“I grew up along the coast so I always felt a little bit out of my element if I ventured too far away from the coast. The prairies can be very beautiful but I really missed the ocean,” Edwards said. “I wasn't on the short list for the (KFMB) job, so I flew myself down here to interview. I've been here for almost twelve years now, so I'm really lucky.”

Luck may have a little to do with it, perhaps, but Edwards has more than demonstrated her on-air professionalism at KFMB-TV over the years, including her work reporting on the devastating 2003 and 2007 wildfires in San Diego County. She said they're the most memorable stories of her career at News 8.

“There's really no format to (the coverage). You're ad-libbing and, more than anything else, I think that is when we (news reporters) fulfill our truest intent of providing a public service to the viewers,” Edwards said.

“You really provide the viewer with a service and become part of the community when you do something like that, telling people where they can go, evacuation sites, which areas to avoid, giving them updates on the efforts to put out the fire, that sort of thing. I think a lot of (news anchors) might go through an entire career without experiencing something like that.”

“My passion is health issues. I'm the station's health reporter and I have been able to help out a few organizations through my position here at the station,” Edwards said. “I do work with the American Heart Association and also a lot of work with Susan G. Komen for the Cure of breast cancer.”

Edwards not only talks the talk, but she walks the walk — literally.

“I do the (Komen) Race for the Cure every year in Balboa Park and I also do the 3-Day Walk, which is 60 miles. I've done it nine times,” Edwards said. “That's a bit of commitment, because I have to train for that one month in advance. I am a runner, so that helps. It keeps your feet tough.”

At a glance, it's easy to discern that Edwards has a passion for health and fitness. She enjoys hiking and playing tennis, as well as running. Edwards cites her mother as a role model for proper diet and exercise habits.

"My mother is a registered nurse and she was, I would say, very ahead of her time as far as diet and exercise,” Edwards said.

“Though we thought she was a bit of an oddball as we were growing up the way she would prepare the food, the small portions of meat with lots of fresh vegetables, that type of thing. And, as a child, I remember her doing exercises to Jack LaLanne on the TV. I don't remember a lot of other mothers doing that, but diet and exercise were very, very important to her. It always was and it still is. She's 82 and she's in wonderful health.”

With her mother as a positive example, Edwards said that taking care of herself for the benefit of her family is a motivating factor as she covers health-related stories for News 8, particularly those dealing with heart disease and breast cancer.

“Heart disease is the No.1 killer of women and breast cancer affects primarily women. I think, as you get older, you start to reflect on that a little bit more. I have two children (a 16-year-old daughter and a 9-year-old son), so I think part of your role as a mother is not just to look after your family, but to look after yourself.”

Looking after herself includes being more than content with remaining at News 8. That makes Edwards somewhat of an anomaly in the broadcast news business, where anchors fire off their demo reels and routinely play musical chairs from market to market.

“I'm surprised when people say, you know, do you ever want to work in this market or that market if it's a bigger city and I think — and this goes back to my passion for health — you have to think about your quality of life,” Edwards said. “My children are very happy here. My husband loves it here. So, I think you have to put the brakes on at some point and think, is this worth the gamble to uproot everybody and maybe never have that again.”

However, while you can take the girl out of Canada, you can't take Canada out of the girl. Just mention hockey to Edwards and watch her face light up. She follows her beloved Vancouver Canucks and attends their games when they play in Anaheim.

A native of Vancouver, B.C., Edwards is a huge fan of hockey and especially the Vancouver Canucks. Photo courtesy of Barbara-Lee Edwards

“It's a little bit of a joke in the newsroom,” Edwards said. "For example, last night, Kyle (Kraska, KFMB sports director) showed highlights of the Canucks game for me. We're good friends and we had a good laugh about it and he does that occasionally. He's a Boston Bruins fan, so we've had some pretty good rivalries during the playoffs, as well.”

Edwards is not alone among Canadian expatriates in San Diego, which is also a popular vacation destination for our neighbors to the north.

“I think I read that there are more Canadians per capita (in San Diego) than anywhere else outside of Canada. I think I see them as I'm driving around this time of year,” Edwards said. “It's in the low-60s and I see people in shorts and sandals. They're probably a little chilly, but they're thinking, 'I'm on vacation in California, it's gotta be warmer!' And who knows? If they're from Winnipeg, it probably is.”