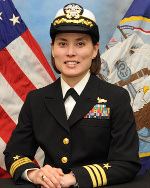 Teresa Elders will be the next commanding officer of the USS Sampson. Courtesy photo

Commander Teresa Elders says she’s like the No. 2 person on the starship USS Enterprise on "Star Trek."

Her warship -- the five-year-old USS Sampson -- is actually stationed at Naval Base San Diego, not in space.

As executive officer, she makes sure evaluations for personnel get done and the ship is clean. On the top of her to-do list so far this year was prepping her ship for a major five-year inspection, which occurred Feb. 25.

“(The job is) making sure everything works the way it’s supposed to work, and people practice things they will demonstrate for inspectors,” she said at her office the Friday before the Monday inspection. “I am looking forward to having the sailors show how prepared they are.”

She’s been preparing on her own for the biggest job of her life: taking the reins of the U.S. Navy destroyer as the commanding officer in November.

“It makes you a little bit anxious -- kind of like taking a test,” she said.

Making sure she aces the test will be challenging, because she won’t be able to rely on anyone else.

“There is no one else to look to -- you are the end all, be all answer to most of the questions,” she said.

Luckily, she has a way to study up for the position: getting advice from her female friend who was the commanding officer of the USS Decatur.

“That’s been helpful,” she said.

In her early years in the Navy, she admits it was hard to find senior women to emulate.

“There were very few women ahead of us. Everyone senior to me on my first ship was a male,” she said.

In the late 1990s, when Elders was fresh out of military school, finding a female senior officer who “had it all” was like a finding a needle in a haystack.

“If there was a woman who was married, she probably didn’t have children or a lot of them weren’t married,” she said. “So, trying to find a woman that had a family, husband, career -- the whole kit and caboodle -- was tougher.”

Elders has had her whole life to prepare for the CO position and credits her educational career to having more of an open mind when she’s on the open seas.

Though the native of San Antonio got a bachelor’s degree in English at the U.S. Naval Academy, she found that classes were very science-oriented and technically based.

So, after graduating in 1996, she pursued a master of arts degree in War Studies at the Royal Military College of Canada. There, having to read a large volume of work and craft and support a thesis helped her think a little differently.

“It’s different from what we do here,” she said. “Everything is very instruction-based, black and white: What do the rules say?”

She admits to being a little timid as a strike officer back then and leaning on her chief for recommendations. He had 20 years experience, compared to her one-and-a half years.

“Now, I am relying more on my gut and my experiences to lead me to decisions, when you come to a crossroads or do you choose A or B,” she said.

Her leadership style has also evolved over time.

“I’ve become more and more forceful though the years,” she said.

She has 275 sailors working for her on the USS Sampson, which she joined in the Persian Gulf last April.

Being one of a few women in a sea of men is nothing new.

“I’m not sure if I’ve ever thought about it too much, because it’s always been that way. I’ve always been surrounded by men,” she said.

Having a Marine brother has made things easier, because he gets the lingo and lifestyle.

“I have someone who understands everything I am saying,” he said. “I am not explaining myself, like sometimes I do when I go home to visit my father’s relatives in Georgia.”

Over the years, she didn’t mind having male mentors, who gave great advice and treated her no differently than male division officers.

They didn’t excel, however, at doling out advice on when to become a mother and how to deal with grade school kids while on deployment.

One of the sacrifices she makes for her job is that her 3-year-old daughter lives on another continent with her Australian Navy husband, who’s currently on shore duty Down Under.

The preschooler has acquired an Aussie accent and melts her heart by calling her “mummy” over the phone.

“It is tough,” she said, who last saw her family over Christmas in San Diego.

Elders and her husband met in 2003 when their ships were on a pier together in Bahrain.

“Their officers had a get-together on their ship and invited officers on other ships on the pier,” she said.

The accidental matchmaking party worked; the duo exchanged email addresses and the rest was history.

Aside from motherhood, she has a long list of accomplishments under her belt and pinned to her uniform.

The medal she’s most proud of is the Navy Commendation Medal she received as operations officer on USS Higgins from 2001 to 2003.

“You’re at war so it’s a little daunting but it’s something to be proud of -- the ship’s achievements and things our sailors did,” she said.
She keeps her certificates at home, but she’s sure to keep family photos on her office walls.

Her newer -- and bigger -- office will be right upstairs. She has yet to see what it looks like.

“I have only been in the outer chamber -- I haven’t been in the inner chamber. It will be interesting to go in there and move into that space,” she said.

For now, scheduling for the USS Sampson is on track for a maintenance period and to start a training schedule for deployment next year.

When she’s on deployment, she fills her down time on the treadmill -- not in front of the DVD player. She's watched only one movie while on the water, she said.

Elders hasn't seen the 2012 action flick "Battleship," where her ship was destroyed by alien craft.

“I’ve heard what happens to us but I still haven’t seen it,” she said.

She also doesn’t have much time to read. She brought a few books with her on her latest deployment, but she managed to get through only one.

“There’s lots of admin work to get through so, at the end of the day you kind of want to sit and veg,” she said.

She does find time to jot down notes in a diary.

One diary-worthy event happened when her ship went through the Suez Canal in Egypt -- a rarity for a West Coast ship.

The ship was tasked to escort a submarine northbound then turn around and come through the waterway that connects the Mediterranean and Red seas.

“It’s not something I ever expected to do. Usually East Coast ships do that,” she said.

While she can cross the Suez Canal off her bucket list, she says she would rather not do it again.

“It was a 12-to 18-hour transit and I was up on the bridge the whole time. As interesting as it was, it makes for a very long day,” she said.

During break time on board, she thoroughly enjoys the food.

The ship celebrated its fifth birthday with a cake while under way in November.

They don’t have the luxury of running to a bakery, so it was baked and decorated on the ship.

Luckily, its bakers are as good as it gets and the smell of fresh baked rolls will wake up sailors in the morning.

Her favorite meal on board is Taco Tuesday. The only con to the weekly feast is nostalgia, she said.

“When you are out on sea, especially on deployment, that reminds you of San Diego,” she said.

Everyone else’s favorite is Slider Wednesday, but she opts for a grilled chicken sandwich over hamburgers.

The health nut takes advantage of outdoor runs now, since running on a steel deck during a deployment is not great on knees or ankles.

When she was in Washington, D.C. as an action officer on the chief of naval operations staff from 2009 to 2011, she stocked up on cold-weather running gear -- which has since gone unused in San Diego.

“I’ve been spoiled and able to run outside year-round and swim more often,” she said.

On the rare occasions she gets to see her husband and daughter, she dumps the diet and hits up Smash Burger in San Diego.

“My daughter gets soft-serve yogurt afterwards. Then you can run it off because it’s so nice outside all the time,” she said.

The day of the interview was no exception.

During the typical gorgeous Friday afternoon in San Diego, divers scraped growth off the hull and others hosed down engineering spaces. Cranes moved heavy metal pumps, which need to be replaced every few years because of prolonged salt water exposure.

Sailors will have little time to rest, however, and will start preparing for an entirely different kind of test in March.

“We have to shift from maintenance mode to training and shooting the guns, which will be fun, but it will completely shift our mode,” she said.