Pumping out the inefficiencies in San Diego's pools

CleanTECH is on a mission to help homeowners lower costs, energy use

By PADMA NAGAPPAN, Special to The Daily Transcript
Wednesday, March 20, 2013 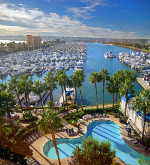 Marty Turock was looking for new ways to save energy and cut costs for the Greening San Diego program that he heads at CleanTECH San Diego, when he decided to play the guinea pig and have an energy audit done for his 10-year-old home in Carmel Valley.

There wasn’t a lot of potential for upgrades but when he asked the inspector about his two horsepower swimming pool pump that was on for eight hours a day to filter the water, he was told there was scope for improvement if he switched from single speed to a variable speed pump, which would run quieter and lower his energy bill by about 70 percent.

“First time I ever opened up my utility bill and jumped for joy,” Turock said, laughing. “So then the light bulb went off in my mind and I wondered if I’d discovered a no-brainer.”

Turock had been looking for a new greening program since the immensely successful street lighting program began winding down -- 14 out of 18 cities in the county have switched or are under contract to switch to LED or induction light bulbs for street lighting, which consumes a big chunk of a city’s energy tab. 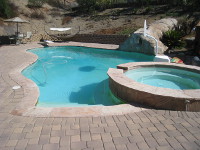 Using a variable-speed pump versus a single-speed pump in a pool, like what was installed recently at this home in Santee, can lower energy costs by as much as 70 percent. Photo courtesy of Marty Turock.

The switch offers a 40 percent reduction in energy usage and with 60,000 light bulbs being swapped out over the past three years, the street lighting program offers the public cost savings of $3 million and 20 million kilowatt hours in energy savings.

So he began comparing energy usage for pool pumps and found they consumed far more than washing machines, refrigerators and other household appliances.

When Turock saw the proof in his utility bill, he looked around to see if others had caught on to the benefits of switching to a variable speed pump and found there was little awareness.

Pool contractors are now required by law to put in either two-speed or variable speed pumps, but up until 2010, it was an option, and because single-speed pumps cost only half as much as variable-speed pumps, most residential pools built in earlier times tend to have the former.

Turock worked with Chula Vista and Santee -- two progressive cities in terms of sustainability efforts -- to launch a pilot program with selected homeowners to demonstrate the benefits of switching pumps.

The pilot used pumps from different manufacturers, but had certified contractors do the work and found that there was an average monthly savings of $64 and the payback was within two years.

“But the cost of doing nothing was $4,000 over five years,” Turock pointed out.

Since the variable speed pump would reduce the load on SDG&E’s grid during the summer months, the utility company got behind the program, offering a rebate for the switch.

Turock estimates that among the utility’s 1 million customers, about 12 percent own pools, which would put the number of pools within its territory at 120,000, although not all of them would need an upgrade.

In general, California leads the nation in the number of homes with pools and also has one of the highest energy rates.

While the pilot program did the switch out for free, going forward, once CTSD officially launches the program later this month, home owners who sign up for the upgrade will need to pay for the new pump.

Turock thinks that any skepticism they have will be overcome, because it’s offered under the CTSD umbrella and will be received with more trust.

Rebates offered are currently only from SDG&E but that may change, he said.

Home owners can apply online and buy the pump anywhere, but they are strongly advised to use only certified pool contractors to do the install, because if it’s not programmed right, the pump may not deliver the benefits that come with it.

Pool contractor Javier Payan, of Payan Pools, explained that if the former pool system was from one manufacturer and the new pump is from a different company, the two systems may not get synced properly, which may require additional work at an extra cost, so no two installations will be alike.

The program will also bring new business for pool contractors in the county and so Payan has begun to have his technicians educate customers on their weekly service route about the benefits of switching over.

He himself did not get excited about the new pump until he put in a pool in his backyard in 2009.

“My wife showed me our utility bill a month after we put the pool in and our bill was the same as before, so I thought, 'Holy smoke.' This despite the fact that we were using the heck out of our pool. This is when I got excited and began selling a lot more of them,” Payan said.

With full-fledged community outreach over the next year, Turock expects homeowners will sign on for the retrofit in large numbers, given it’s a “no-brainer with no negatives.”

“Working through the numbers, if we can secure SDG&E approval and support to take this program countywide, I see no reason why we couldn't expect to achieve a minimum of 10 percent penetration, and maybe as much as 30 percent in a three-year period,” he said.

“That would equate to a combined residential energy reduction of 25 million to 75 million kilowatt-hours per year, which represents consumer savings of $5 million to $15 million on annual utility bills.”