Figtree CEO 'fine-tuning' solar financing, one city at a time 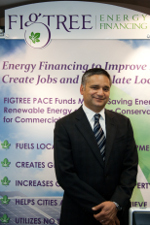 With a heavy financial background, Mahesh Shah, chief executive officer for Figtree Energy Financing, is steering the company toward expansion.

Within the next couple of months, Figtree, a Mira Mesa-based facilitator of transactions using the financing mechanism of property assessed clean energy — PACE, will begin its part in carrying out the PACE program approved by the city of San Diego.

An increasingly popular financing option, PACE allows a commercial property owner to repay the costs of energy and water efficiency upgrades over a period of time through a voluntary assessment on property tax bills. The program can be administered to fund projects’ upfront costs through either the tax-assessing municipality’s treasury or an outside company’s privately raised capital.

Figtree provides an option for the latter of those two methods, and is today the only San Diego-based commercial PACE provider. The CEO of the company since it was formed less than two years ago, Shah signaled that he’s just getting started.

His quest to raise Figtree to the top of its class resembles in ways how he’s pushed himself to be more than just any certified public accountant.

With an MBA in finance from the University of Rhode Island, his early career path set a tall precedent for what was to come. In the same year he graduated from Rhode Island, he went to work for one of the “Big Four” accountancy firms, Price Waterhouse — now PricewaterhouseCoopers or PwC, in 1989.

For five years, he focused on financial restructuring and cash flow analyses. His career then bloomed -- he was hired as CFO and CEO of several companies, raising capital and helping expand businesses with specialties ranging from management consulting to technology and manufacturing.

He even found himself at some startup dot-coms.

When deciding to join Figtree — also a startup at the time of his arrival, just three months after the company came to be — Shah didn’t have a particular interest in the environmental platform of the business.

But joining a business built around the growing platform made perfect economic sense to him.

“That’s usually the case with innovation, particularly. You’ve got to keep fine-tuning it.”

With a journal at arm’s length — visibly filled with copious notes — Shah reached over and flipped to the next open page between questions on how he’s modeled Figtree’s fine-tuning, providing insight to how he handles being a chief executive.

“I’m just writing some notes here,” he said. “This is how I think. Everyday it’s different.”

He filled two journals just like it last year, he said, though he can’t recall a time he’s ever had to review what he’s written.

“Just the comfort of having this thing is a wonderful thing,” he said.

He describes what he’s creating at Figtree as an “elegant” solution for a market looking for more options. Even though economics was his initial motivator, Shah said each successful financing does come with a sense of environmental stewardship.

“I’d be lying if I said I was really energy-focused (in the beginning),” Shah said.

But the job helped create a passion, he added.

“At the end of the day, you feel wonderful," Shah said. “You reduced the carbon footprint. You employ contractors. You improve the properties. And these new technologies that are coming out of the marketplace, they are lacking financing options.”

Local governments have quickly realized they typically don’t have the capital to administer their PACE programs using their own treasuries. So the practice of looking outside has become commonplace. But hindering competition has been the tendency for municipalities to enter into exclusive arrangements with providers, Shah said.

His goal is to break those barriers of exclusivity down.

“Let’s create a competitive marketplace,” Shah said. “If you have your own program, also allow us to come in, and offer our financing, and our terms and our services,” Shah tells potential partner cities and counties.

The property owners benefit because of the competition, he said. Offered interest rates, for example, could differ from one financing arm to the next. And the municipality makes out because the agreement comes with no costs to the locality, he added.

Other transactions involving financing, like purchasing a car, offer options with customers having the ability to go to different banks and credit unions, so why not have the same ability with PACE, Shah asks.

Still in its early stages at the time, Figtree successfully teamed with the city of Fresno in July 2011 to become its PACE provider. In a short amount of time, it partnered with other smaller cities and counties in the Central Valley and Palm Springs.

Back then, larger cities like San Diego were still evaluating options. The city of San Diego initially launched its program in partnership with CaliforniaFirst, an open-market model that’s not a financing arm, but that sets up property owners to review offers from lenders.

It took months of due diligence with the city of San Diego, Shah added, but last October the San Diego City Council made history when it approved Figtree’s offer, becoming the first municipality in the state to approve a second PACE provider.

The Figtree model is gaining momentum, Shah contends, as it provides financing for projects as small as $5,000 in cost, versus the $50,000 minimum for projects using the CaliforniaFirst model.

Success on the floor of the San Diego City Council didn’t by any stretch mean Shah’s mission was accomplished, though. Many challenges -- and opportunities -- still lie ahead.

In February, the San Diego County Board of Supervisors authorized its staff to find ways to improve the county’s implementation of PACE, ordering it to report back within four months the results of a study of PACE programs implemented up and down the state.

Shah is taking that examination as a chance to present Figtree’s model to the county and other cities in the area and state.