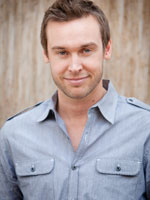 It pays to have friends in high places.

For the CEO of Mogl, a Sorrento Valley-based restaurants rewards program, that means being chummy with Sir Richard Branson.

Mogl is the only company fulfilling that category under Virgin's frequent flyer program, called Elevate.

Every time members eat at one of thousands of Mogl-participating restaurants in California, cash back is automatically converted into Virgin America Elevate points.

"You can rack up flight miles quickly," said Jon Carder, CEO of Mogl.

The deal, two years in the making, was made in flashy fashion on Branson's 74-acre private island in the British Virgin Isles called Necker Island. The Englishman's residence in paradise doubles as a small resort. Carder scored a coveted invite two years ago.

"It's pretty ridiculous out there. A billionaire's island, with beaches on each side," he said.

Animals are everywhere, and the island is known to house a rare species of gecko.

During the trip, Carder conversed with Branson about Mogl, which was just getting started at the time.

Mogl's "Eat Out, Cash In" motto means customers get 10 percent cash back any time they dine at a participating restaurant and pay with their registered debit or credit card.

There's no need for coupons, punch cards or QR codes. Consumers compete to be the biggest spender at each restaurant or bar, with cash jackpots up to $300.

At the PB Shore Club, for example, a first-place jackpot winner gets $200 in cash back — that's enough for a round-trip flight from San Diego to San Francisco.

"He got it right away. The jackpots and first-through-third place. Gamifying restaurants — he thought that was cool," Carder said.

Branson, who has a net worth of $4.2 billion, was also impressed by the donation portion of the program.

"If you get enough people to join Mogl, you can put a huge dent into the hunger program. He really liked it," Carder said.

But the brand was too new, and Branson wasn't ready to sign on a dotted line.

To date, the company has distributed more than $2 million in cash-back to its users.

Now that Carder had proof the concept works, it was time to sell the idea to Branson. It was one of Carder's biggest pitches to date: Make Mogl the official dining rewards club for Virgin brands, which also encompasses mobile and music.

"Let's start with Virgin America. There are all kinds of opportunities to expand globally and partner on a deeper scale," he said.

"He gave me the verbal green light on the island," Carder said. "Once I got back to San Diego, he made an [email] introduction to Virgin America's loyalty program and it got done in a week."

Mogl's easy concept is catching on, and its member network grew five times over the past year to 100,000 users.

The company, with more than 70 employees, has expanded into four other California markets: Orange County, Los Angeles, Ventura County and the San Francisco Bay Area.

In California, Mogl has more restaurants on board than all of its competition combined.

Starting Thursday, Virgin America Elevate members can sign up with Mogl and start receiving 30 points for every $1 cash-back when dining out at Mogl-participating restaurants.

Mogl members can also sign up with the Virgin America Elevate program and choose to receive their cash back in the form of Elevate points.

Virgin is spreading the word about the Mogl partnership via a giant announcement to its 1 million Elevate members and use of social media. It will also be posted on the Virgin America website. Expect to see Mogl signs in airport terminals.

The partnership offers a way for college kids to compete with friends for cash jackpots — and it also keeps students on campus to dine.

"It's the first of hopefully many colleges for Mogl," Carder said.

The company is nearing profitability and Carder said it will be there in 2014.

"We are getting ready for a massive nationwide expansion," he said.

Over the next six to 18 months, Mogl will start expanding outside of California, though Carder declined to name markets.

"It's a pretty exciting industry we are in," he said.

Consumers pump $750 billion a year into restaurants in the United States each year.

"Competing for those dollars, if all goes well, this could be one of San Diego's billion-dollar startups," he said.