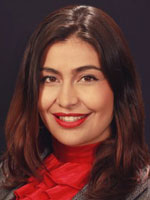 But she also had something many similarly polished candidates might have lacked: first-hand experience growing up in one of National City’s poorest neighborhoods, just a five-minute drive from her office.

As the daughter of working-class Mexican immigrants, Reynoso learned early about the intertwined problems of poverty, drugs and violence. Many girls she knew were pregnant before leaving high school. Many boys became involved in gangs in elementary school. “It wasn’t strange to hear that a friend of the family had been shot or killed because of gang activity,” she said.

She didn’t want to work in the fields, like her mother’s family had done, or become a teen mother, as was happening with her friends.

“For me, the answer was education,” she said. “I gave it my all. I knew that was my ticket out.”

Although Reynoso couldn’t speak a word of English when she entered school, she excelled in her studies with help from her mother, who took an active role in her education. After landing in a magnet program that bused her to Point Loma High School, she graduated as class valedictorian, paving the way to a full-ride scholarship to Berkeley.

After earning a graduate degree from Harvard, she landed a job as manager of board and shareholder relations at Promerica Bank (now known as ProAmérica Bank) in Los Angeles, where her duties included building partnerships with community organizations.

“For me, that was the best of both worlds, working within the private sector but being engaged in a public mission,” she said. “But it also made me want to be on the ground working on economic development programs.”

Reynoso got that chance in 2007, when National City hired her as a community development coordinator, spearheading the city’s storefront improvement program and outreach campaigns. A year later, she was hired by the chamber. Since then, she has introduced a number of programs to help strengthen National City’s small businesses, including:

*A consulting program linking small businesses with San Diego State University business students who generate suggestions to help them improve their performance. The businesses can get forgivable loans of up to $15,000 to implement the recommendations.

*An internship program to help high school and college students get on-the-job experience.

*The National City Tourism Marketing District, which promotes the city as a potential tourist destination. Reynoso currently heads the hotel-funded district, modeled after a similar program in San Diego.

Reynoso’s interest in such programs is partly fueled by her experiences growing up.

“The chamber’s tagline is that we’re ‘Building businesses and community,’ “ she said. “When we bring businesses together and give them resources to flourish, we can create a place where even more businesses will invest and families can move here as a safe place to live and go to school.”

I am so proud to know and work with Jacqueline. A more humble person I have not met. And yet she is so effective, so confident. What a wonderful profile this is of a truly deserving individual.