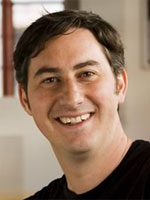 Realtidbits, which provides white-label solutions for user-generated and social media content, got started when CEO Kelly Abbott was commissioned to do a real-time forum for ESPN’s website.

“We realized we can build a company around this,” he said.

The longtime product development expert, whose resume includes stints at Harpo, sportsfanlive.com and Mindtouch Inc., doesn’t call himself a CEO but rather the “CLO,” or the chief learning officer.

“I have to be listening to what customers are asking for and what they are not asking for and to really dig to be constantly engaged and enthusiastic for the marketplace,” he said. “A lot of that is learning.”

Every day millions of people read, write, share and like comments on its customers’ sites, which range from Nasdaq to Lady Gaga to ABC.

Each month it analyzes billions of interactions and social shares around the world.

Realtidbits went to the market just about a year ago and is up to about 30 clients, which include publishers, media companies and high-traffic dot-coms.

One is The CW, a major broadcast network that’s trying to break the mold. Their shows, which include "90210" and "Vampire Diaries," have a niche viewer.

“They realize their audience is essentially teenage girls, who don’t care to have cable or TV," he said. "They do everything on phones or tablets.”

As a result, the CW offers its content online for free.

“They are really trying to make websites a destination for their audience. They use our tools to make it a more appealing destination,” he said.

Its products are designed first with the mobile user in mind, he said. RealTidBids powers elements like comments, forums, pinboards, image galleries and analytics.

The CW wanted users to build lists of songs they wanted to hear on the shows through the Spotify music app.

“So we created a connector between Spotify to leave songs and comments,” he said, adding publishers are starting to realize social media isn’t a fad and it’s here to stay.

“They want that social interaction to happen on their properties, so we empower them to do that,” he said.

That means creating “second screen experiences,” and augmenting traditional TV watching by letting users add content and value to their sites as opposed to outsourcing it, he said.

Realtidbits doesn’t have huge capital or overhead expenses because it picks, borrows and puts together systems that are already pre-built.

“We find the best of breed technology that’s already supported and plug them in,” he said. “It’s easy for us to innovate and for us to continue to outpace our competitors as far as product development is concerned.”

He’s on the prowl for sales people in New York and Los Angeles, which are big hubs for potential media clients. Realtidbits is not looking for funding, he added.

“We made a profit last year and will this year – that is a point of pride for us,” he said.

Being acquired by a major media company would be an option he’s open to down the line.

“It would make sense to add a team like ours,” he said.