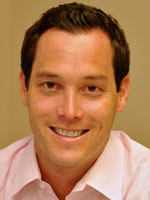 That seems to have paid off when it comes to his business, Renovation Realty.

In fact, the 28-year-old company president has a goal of having 100 franchises in 10 years, while still being based in San Diego County.

A 15-employee firm, Renovation Realty is unique in that it helps clients with both renovating and then selling their home.

"We are in it for the homeowners," Christian said. "It's a partnership. One goal is to maximize value."

For the third-generation San Diegan, real estate is a family affair: His parents, Keith and Karen, are also in the profession.

Their son, who earned his bachelor's degree in general finance from Santa Clara University in 2007, said he liked "investments in concrete interests."

He and his father were flipping homes and knew that sellers could get more value from upgraded properties.

That was the start of Renovation Realty in July 2011, and it was a good time, even with the ongoing recession.

The biggest challenge for Renovation Realty -- like most startups, especially one with a new business model -- was putting the company's name out there.

"We have been more successful than expected," he said. "We're doing double the business. Others are asking, 'Are you franchising?'"

For example, in 2012, they worked on 29 renovations and sales. This year, it's projected to be more than 45, Cannon Christian said.

Rick Hasay -- president and CEO of Hasay and Associates, a Solana Beach-based marketing and advertising firm -- described Christian as an impressive and humble person.

"In construction terms, he would 'measure twice and cut once,'" said Hasay, who got to know the young businessman by working with Renovation Realty. "He thinks, listens [and] takes in all the information he can, and speaks once he has a feeling [about a topic]."

Christian's job takes him around the county on a daily basis.

When it comes to his clients, "each week brings a new situation, [just] when we think we've seen it all," he said. That can include sellers facing serious financial issues or a home damaged by hoarding.

At one Poway house, they carted away contents filling 12 commercial dumpsters.

Christian believes that being a member of the millennial generation allows him to "see things differently" when it comes to business, and that includes using social media outlets –- like Twitter -- and technology in a more efficient manner.

He is looking forward to a big rollout on April 1, complete with advertising.

Christian said he admires the Irwin Jacobs family, John Moores, Ernest Rady and Conrad Prebys for their philanthropy, and he added that community involvement will be part of his business.

When he's not closing a real estate deal, Christian enjoys paddleboarding, playing volleyball or relaxing with friends in La Jolla while sipping on a good beer.

Great article Cannon....and right on the nose. Best wishes from us.