Young broker lauded as one of the best in the nation

By Michael Klam, Special to The Daily Transcript
Thursday, March 28, 2013 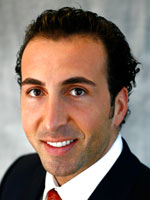 Alvin Mansour was born and bred for business. Working in the family market at an early age and watching the business diversify into real estate sparked his passion for building teams and making deals.

A go-getter from the start, he earned his bachelor’s degree from the University of San Diego and promptly landed a lucrative position at Marcus & Millichap. He won Rookie of the Year in his first year at the firm, and within three years he was a Top 10 Broker nationwide.

Mansour is senior director of the National Retail Group and senior vice president of investments.

“In 2012 we did over 80 transactions totaling over $400 million dollars,” Mansour detailed. “In 2013, we are expecting sustained growth in both the single and multi-tenant sectors. We currently have a couple major transactions under contract,” he added.

In 2012, Mansour and his team facilitated the sale of Uptown District Shopping Center off University Avenue for approximately $81.1 million. This was the largest retail sale of the year in the county of San Diego, according to Mansour.

“It was a crowning achievement of mine and a proud moment for me because it happened in a city that is so near and dear to me,” he said.

Another standout in 2012 for Mansour’s team was the ViaSat Digital Communications office building in Carlsbad. It closed in July of 2012, and the sale transacted at a record-breaking $341 per square foot.

Mansour credits his team for the success. “We are a group of nine driven individuals that work to streamline the process of our clients’ investment experience,” he said.

Each member has a specialized segment of the brokerage continuum, he explained, and each has specific responsibilities ranging from marketing, analysis and research, to transaction coordination.

“We work like a well-oiled machine to make sure our clients are provided with the best possible service,” Mansour said.

He has his brother with him on the team, keeping family close. And his team members support him in full.

“Alvin employs a large team of people, which he genuinely cares for, and is an all-around thoughtful guy, despite his great success thus far,” Operations Manager Jamie Newland said.

Mansour’s outlook for the industry is generally positive, and he expects it to remain relatively stable over the next 18 months, “provided interest rates don’t spike,” he said.

At a young age, Mansour has already achieved in his field what many spend their lives pursuing, and he has done it not just for himself but also for his family, his team and his community.

As a philanthropist, Mansour has funded the construction of a Catholic church in Nicaragua through Mother Teresa’s Order. Also, with more than half of The Mansour Group as graduates of the Burnham-Moores Center for Real Estate at USD, the team remains involved in the activities of the organization and participates as a large donor.

“Alvin makes impossible deals happen, and contributes greatly to the San Diego economy, both economically as well as in his personal efforts,” Newland said.