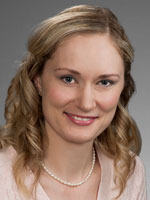 A native of Ukraine who emigrated more than 10 years ago, Prescott is now the co-founding shareholder of a thriving boutique law firm in San Diego — Cross Prescott APC — and a recent recipient of the International Bar Association's Outstanding Young Lawyer of the Year award. She's the first woman to earn the IBA's prestigious honor.

"She has a maturity you don’t find [in young lawyers]," said Bob Howard, a partner at Latham & Watkins and a former colleague of Prescott's. "She's a well-spoken attorney who comes across very well and very credibly.

"She not only prepares spectacular briefs heading into court, but once she's before a judge, she has a command, a presence that makes for an effective advocate."

Growing up in the former Soviet Union — where there's "no such thing as the rule of law," she said — Prescott was attracted to the U.S. judicial system and the opportunities for justice it gives women and underrepresented groups.

Shortly after arriving in the United States in 2000, Prescott, who had been a journalist for Ukraine's state television station, decided to change careers as well as countries, and attended Duke University School of Law.

She and her husband, Oleg Cross, who had been working at Cooley LLP, both decided they wanted to focus on representing clients in personal-injury cases, so they formed their own firm in the fall of 2012.

She specializes in personal-injury cases, including traumatic brain injuries and nursing home abuse. Part of the reason Prescott is such a great advocate is because she gets emotionally invested in each case.

"Clients, when they come to me, feel helpless and claim that if I didn't take their case they wouldn't have any other recourse," Prescott said. "It's important to me that they walk out of [the case] feeling they got justice.

"For me, I know really well what a client feels when they go through the process — how stressful it is. It becomes a personal case for me, and I not only want to make sure that the client is represented well by me, but also to make sure the client is not stressed along the way."

She borrows heavily from the skill set she honed as a journalist.

"I made it a point to seek her out whenever I had a tough brief to write because I know it would be done well [with her advice]. She has a gift for writing and writing clearly on difficult issues."

She earned a master’s in English from Tulane University, completing the three-year program in one year, and continues to work hard to refine her writing, with legal articles whenever she can.

"She's detail-oriented," Cross said. "She will go through the nitty-gritty of a long contract and find the one line that makes a difference in the case. She really cares about her clients, and ultimately, that comes through."