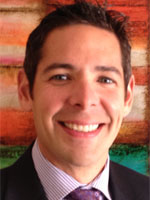 Redmond, 32, graduated from Washington State University’s College of Business and Economics and took a job selling medical devices for RS Medical in San Diego County. He built up relationships with orthopedic spine surgeons and neurosurgeons that allowed him to open his own company in 2007.

Redline started as a distribution channel for spine implant devices, used for spinal deformities like scoliosis and other degenerative diseases and trauma. The company has since expanded into total joint replacement devices. In addition, Redline staff serve as technicians in the operating room when surgeons use new technologies.

At first, Redmond partnered with a small, private medical device company in Florida, but the long-distance relationship made customer interaction and distribution of products more difficult. The company soon looked for partners nearby.

“Not only were they better companies with better product lines, but I felt it was optimal for us to partner with these two companies with our existing relationships in San Diego,” Redmond said.

For now, Redmond intends to stick with these two partners, though he said several other companies have come knocking on his door. He has no immediate plans to expand Redline’s service area beyond San Diego.

“We’ve got so much more opportunity than what we’re already doing,” he said. “In fact, we’re currently growing with our foot on the brake pedal. We’re planning on hiring an additional employee April 1 and another shortly after that.”

In the near term, Redmond said the company will continue to prosper and gain market share in the county. The long-term picture for the industry, however, is a bit fuzzy.

Amid an ever-changing health care industry, increased regulation and slowing innovation, Redmond said many medtech companies are holding revenues closely and being very strategic in their research and development investments.

He expects more joint replacement procedures to be done as Boomers continue to age. But with reimbursements on the decrease, he said it behooves medical device companies to start partnering with hospital systems and physicians to keep the industry thriving.

“I try to partner the two together to work as a cohesive unit to minimize cost and drive marketing and brand awareness,” Redmond said.

The surgeons Redline works with have input into the research and development side.

Redmond says he’s been “blessed” with business so far. And as a way to give back, he has become involved with several community groups, including the March of Dimes, Boys and Girls Clubs and Home Start.

“This is kind of just the beginning for me to give back. I think it’s very important, and I have a great time doing it, because it helps balance the business side of things with Redline and also allows me to truly see the community, the efforts we put into it and what the community really needs.”