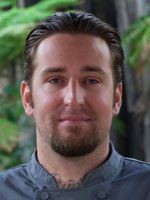 Robert Ruiz, executive chef at Harney Sushi, is a man who loves seafood. He wants to educate as many people as he can about exactly where and how the fish they eat gets to their plate.

He is a huge advocate of serving sustainable seafood -- fish and shellfish that are caught or farmed in ways that are ecologically responsible.

He gained his passion for sustainable seafood while working in Hawaii, after moving from Oceanside as a teenager.

He was a surfer, a student and broke -- until a friend helped him get a job in the kitchen at Lulu’s bar and grill in Kona. Ruiz cleaned fryers and washed dishes.

He asked the right questions, soaked up everything he could from others and learned how to cook. He was able to move up the ranks by being a quick learner and staying loyal.

Ruiz eventually worked at the prestigious Hualalai Resort, where he was mentored by Alan Wong and renowned sushi chef Etsuji Umezu.

“I learned about the best way to operate,” Ruiz said. “In Hawaii, it’s not timely to import something you don’t have because you are on an island, so you learn to cook and use what’s around you.”

In 2005, he returned to San Diego and has educated himself on sustainable seafood. He looked for ways to become certified and find the right fish to serve to his customers, but received conflicting information.

His journey for truth and social responsibility led him to fishwatch.gov and the federal government agency NOAA (National Oceanic and Atmospheric Administration), which has its western regional headquarters in San Diego.

In August 2012, Ruiz was introduced to Sarah Mesnick, an ecologist and science liaison for the Southwest Fisheries Science Center, NOAA Fisheries Service. She was impressed by his hunger for knowledge.

“The main thing that impressed me was he wanted to meet with scientist and read scientific research to try and understand the root of the situation,” Mesnick said.

Through this relationship and his thirst for knowledge, he is now a guest participant in a one-unit sustainable seafood class at the Scripps Institution of Oceanography.

“Sustainability is becoming more of the standard," Ruiz said. "Financially, it’s profitable because there is a demand.”

Ruiz said information about sustainable seafood items isn’t readily available at restaurants, and wants to create new policies so that it can be available to customers.

He already does his part at Harney Sushi by giving customers a card with information about the origin of the particular fish they ordered. He also recently created an innovative “edible QR code” -- a matrix bar code made from edible ink and printed on a rice wafer -- that can be placed directly on top of nigiri sushi or any dish he serves. Diners can scan the QR code on their mobile phones -- which takes them to fishwatch.gov -- and then eat it. Harney Sushi is the first restaurant in the United States to launch such a program.

“This eliminates fish fraud and creates transparency on how and where we get our fish,” Ruiz said, adding that Harney Sushi is the first restaurant to use the NOAA FishWatch website. “Instead of using third-party private certification, we’re going straight to the source and wanting people to do the same.”

Another issue Ruiz said is that there aren’t enough sustainably certified fisheries or aqua farms to keep up with demand.

“He’s leading San Diego on how we should look at and eat fish,” Mesnick said. “He can really make a difference.”

Good work in the right direction but I don't think he's the first. Jose Duarte here in Boston has been doing this with squid ink QR codes on the plates& fishermen here in a unique traceability program.