The sun still shines in California, but that’s not enough to keep the population from migrating to other states, according to panelists at the North San Diego County Association of Realtors’ Conversations 2013 event on Friday.

The first panel featured Richard Rider, chairman of the San Diego Tax Fighters; Steven Frates, director of research for the Davenport Institute for the School of Public Policy at Pepperdine University; Robert Brown, professor in the economics department at California State University at San Marcos; and George Chamberlin, executive editor for The Daily Transcript, who moderated the panel.

Rider said California is in direct competition with the other states and is the “engine of prosperity … for the other 49 states.”

From 2000 through 2009, California lost a net 1.5 million people, Rider said. In 2008, net domestic migration slowed because homeowners couldn’t sell their homes. In 2011, California lost 100,000 people in net domestic migration. Rider said these are the young and educated people who are leaving, as well as retirees who are taking their assets and moving elsewhere. Once prices improve, Rider said those people will say, “I’m outta here.” 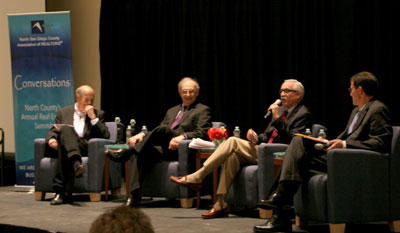 Brown said highly skilled entrepreneurs are attracted to pockets of California, and people look at the area as a form of compensation. But people are more mobile today than 10 to 20 years ago, and are becoming increasingly more mobile, Brown said.

“San Diego is like flypaper. You get here, and it’s hard to leave,” Rider said. But the destruction of the California economy could result in our children and grandchildren having to go elsewhere, he said.

Rider said this is the result of unintended consequences. The tax increases from Proposition 30 result in California reporting the highest state income tax rate, which is 21 percent higher than the second highest, he said.

But the biomedical and technology fields are a bright spot for California, Rider said.

“Venture funding is rolling into California,” Rider said, but not before mentioning that, “the state of California can screw anything up and just did.”

He was referring to the exemption for a startup company, which states if a startup is sold, half of the capital gains are no longer taxable. However, the franchise board eliminated that 50 percent exemption and passed it retroactively four years back — so startup companies that were sold four years ago will owe that money plus interest, Rider said.

This change may be solved by the Legislature, he added, but it has already shaken the confidence of young entrepreneurs and venture funds that provide the money.

Also a depressant to the business climate is the loss of manufacturing, Frates said.

“Manufacturing goes where it can be done cheaply and efficiently,” Frates said. “Manufacturing was the fastest escalator for Latinos to buy housing. … We tax manufacturing, penalize it and move it out. It’s bad public policy, but we’re doing it. Is there hope for it in the future? Could be.”

Unfunded pensions is one of the big challenges the state faces, according to Frates. The money owed now to make pensions whole could be more than half of $1 trillion, and some have told Frates that that’s a low number.

“A pension system is in good shape if 80 percent of it is funded. Many in California are under 40 percent funded,” Frates said.

Speaking to a group of mostly Realtors, Frates mentioned that low interest rates are driving the housing business, but “how much longer that can hang on without inflation is up to debate.”

Brown said interest rates have to go up because they can’t go lower, but he mentioned that he said that about six months ago and the rates did go lower.

Large deficits and debts are looming, Brown said, and there are two ways to pay for current consumption — one is to borrow and push the cost to future generations, or increase taxes. Both will ultimately affect interest rates and mortgage rates, he said.

“It’s the longer-run, longer-term issue again related to, how do we deal with these long-term debts, deficits and how to counteract them so they don’t become a drag on the longer term,” Brown said. “[If we] come to grips with a lot of these things, it will remove a lot of uncertainty that drags on the economy and also send some positive signals internationally that we can manage our fiscal house. We take these issues seriously.”

That would mean making “very difficult, painful political choices that impact us all, because to get a grip on this long-term debt and deficit, [we need to] either cut spending and/or increase revenues,” Brown said. With 75 percent of the spending in entitlements, which can be changed but requires legislation, this is “easier said than done.” Painful changes could include losses in tax revenues from excluding employer contribution plans and the homeowner mortgage deduction, which could affect the housing market.

“At some point, we’ll be shifting around cuts and the increase in tax revenues in some way that maybe isn’t as observable, just an immediate raise in tax rates or something like that,” Brown said. “I don’t know that it’s necessarily catastrophic. That’s not to say that I don’t worry about a long-term debt ... but I do think that there’s a price to be paid and it’s forgoing some economic growth, at some point, some prosperity essentially if we don’t deal with these issues.”

Frates said he is “guardedly optimistic.” Medical technology and high-tech applied to low-tech environments are strengths he sees.

“Efficiency is coming to government," Frates said. "It’s coming obliquely, but it’s going to come quickly and in a landslide and in a hurry as citizens get to see what the relative cost is with great precision.”