While the rough economy may have been the biggest cause, Poway has also seen its raw water cost nearly double, from $420 to $807 an acre-foot in the past six years.

Each of the courses -- Escondido closed April 1 -- was also faced with the reality that significantly fewer rounds are being played today than before the recession.

StoneRidge Country Club is set to go to auction at the East County Regional Center in El Cajon -- assuming it isn’t placed in bankruptcy protection to forestall the sale. La Jolla Development could not be reached for comment.

A La Jolla Development entity owed $6.42 million on a note as of the trustee’s sale notice March 31. 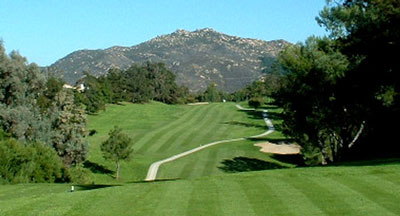 Pat Staub, a StoneRidge member who has lived next to the golf course since the 1970s, said the course has been maintained as well as can be expected, especially given the poor economy.

Staub said fees vary widely and that membership is off from 10 to 15 percent because of the recession; more women have dropped out than men.

Anne Gold, an associate with Century 21 Award, said the StoneRidge townhomes are generally priced from the low- to mid-$300,000s and the detached homes surrounding the course range from $500,000 to $800,000, with a few priced higher than $1 million.

Jeff Smith, an agent with Pacific Sotheby’s International Realty, said that home just went to escrow and he knows of at least one large home with a commanding view over StoneRidge and neighboring Madera courses that is worth about $12 million.

“There has definitely been a negative impact to those homeowners who surround the course,” Smith said. “It lost a lot of equity memberships.”

While the future of StoneRidge isn’t certain, Bob Manis, Poway development services director, said the golf course property has an underlying open-space zoning. Under Poway’s laws, any future owner would be required to take a development proposal, such as a residential project, to Poway’s voters because it would require an amendment to the community plan.

Poway Mayor Don Higginson said he doesn’t foresee the golf course will ever be anything but a course.

“I will go to Mars before that happens,” he said.

That said, Manis conceded that making and keeping StoneRidge financially viable won’t be easy. While the course and its facilities may need millions in upgrades, Manis seemed to be more worried about the upkeep.

“There are concerns about economic viability and the cost of water,” Manis said, adding that another type of recreational use or a church might be possible alternatives.

“I would like to see this stay as a golf course, but the costs are very difficult right now,” she said.

Gold also said she expects StoneRidge to remain a golf course for the foreseeable future.

StoneRidge homeowners aren’t the only ones wondering about their golf course. Residents and members of the Escondido Country Club are having a similar conversation, but with one big difference: The developer, Stuck in the Rough, a Beverly Hills-based golf-oriented investment firm, has bought the country club for the $7.43 million debt amount and is planning a residential development with hundreds of housing units.

While the Escondido property has the underlying residential zoning, a battle is expected when it goes to the Escondido City Council.

Gold said she feels it is time for the Escondido property to disappear.

“The fairway looks very nice at StoneRidge, but in Escondido, that one was choppy. It was bad,” Gold said.

Finally, there is what was formerly known as Lake San Marcos Country Club & Resort. That property, now known as Lakehouse Hotel & Resort, was sold at a trustee’s sale in October for the $7.37 million remaining on the note. The buyer was a unit of Rancho Santa Fe-based Pacifica Enterprises, which initially placed $1.2 million toward the purchase.

Brett Miller, CEO of the Eat, Drink & Sleep property management firm, said Pacifica is spending $9 million on the rooms and clubhouse, and more than $1 million on the course.