Blue Angels will not fly over Miramar this year

Sequestration will keep one of the most popular aviation acts in the world from dazzling crowds at the Marine Corps Air Station Air Show in San Diego this fall.

The U.S. Navy axed the remaining 2013 performances of its
premiere Blue Angels flight demonstration squad because of the ongoing defense budget crisis, officials said on Tuesday.

"This is one of many steps the Navy is taking to ensure resources are in place to support forces operating forward now and those training to relieve them," said the Navy, in a statement.

Since they were formed in 1946, more than 463 million people have stared up at their jaw-dropping shows. Top-notch pilots hold formations just inches apart while performing complex maneuvers.

The squadron, which had 33 appearances scheduled for the rest of 2013, will continue to train at its home station in Pensacola, Fla.

The F/A-18 Hornets used by the Blue Angels are 56 feet long, weigh 56,000 pounds at take-off and can hit speeds of 1,200 miles per hour. An estimated 11 million spectators view the squadron during air shows each year. 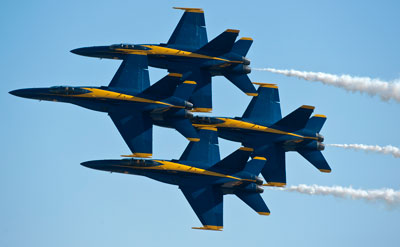 "The Navy intends to continue aerial demonstrations in the future as the budget situation permits," said the statement.

Air shows will still go on as planned without the Blue Angels, including the one in San Diego from Oct. 5 to 6.

"Although we always enjoy having the Blue Angels here, they don't drive the Miramar Air Show and we're anticipating an even more spectacular show this year than last year's," said 1st Lt. Ty Balzer, a Miramar spokesman, on Tuesday.

More than 500,000 spectators flock to the San Diego show each year, making it San Diego's largest annual event. That number is expected to hold steady this year, said Balzer.

“I don’t believe this [Blue Angels] act being canceled will take away from attendance, especially this year," said Lt. Chad Hill, another Miramar spokesman.

The theme of the 2013 air show showcases the U.S. Marine Corps' capabilities by focusing on the Marine Air-Ground Task Force.

“Before that was just a piece of the air show. Now it's a huge piece as we push to highlight what the Marine Corps does, since this is how we fight," he said.