Citing a series of technological breakthroughs, Navy leaders announced plans April 8 at the Sea-Air-Space exposition to deploy for the first time a solid-state laser aboard a ship in fiscal year 2014.

"Our directed energy initiatives, and specifically the solid-state laser, are among our highest priority science and technology programs. The solid-state laser program is central to our commitment to quickly deliver advanced capabilities to forward-deployed forces," Chief of Naval Research Rear Adm. Matthew Klunder said. "This capability provides a tremendously affordable answer to the costly problem of defending against asymmetric threats, and that kind of innovative approach is crucial in a fiscally constrained environment."

The announcement to deploy the laser onboard USS Ponce (AFSB[I] 15) comes as Navy researchers continue to make significant progress on directed energy weapons, allowing the service to deploy a laser weapon on a Navy ship two years ahead of schedule. The at-sea demonstration in fiscal year 2014 is part of a wider portfolio of near-term Navy directed energy programs that promise rapid fielding, demonstration and prototyping efforts for shipboard, airborne and ground systems.

"Our conservative data tells us a shot of directed energy costs under $1," Klunder said. "Compare that to the hundreds of thousands of dollars it costs to fire a missile, and you can begin to see the merits of this capability." 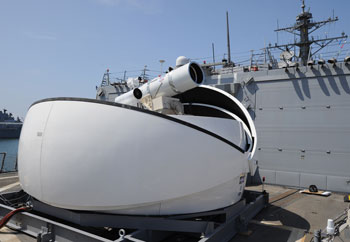 The Office of Naval Research (ONR) and Naval Sea Systems Command recently performed demonstrations of high-energy lasers aboard a moving surface combatant ship, as well as against remotely piloted aircraft. Through careful planning of such demonstrations and by leveraging investments made through other Department of Defense (DoD) agencies, researchers have been able to increase the ruggedness, power and beam quality of lasers, more than doubling the range of the weapons.

"The future is here," said Peter A. Morrision, program officer for ONR's Sold-State Laser Technology Maturation Program. "The solid-state laser is a big step forward to revolutionizing modern warfare with directed energy, just as gunpowder did in the era of knives and swords."

Officials consider the solid-state laser a revolutionary technology that gives the Navy an extremely affordable, multimission weapon with a deep magazine and unmatched precision, targeting and control functions. Because lasers run on electricity, they can be fired as long as there is power and provide a measure of safety as they don't require carrying propellants and explosives aboard ships.

Lasers complement kinetic weapons to create a layered ship defense capability, providing improved protection against swarming small boats and unmanned aircraft at a fraction of the cost of traditional weapons.

The advancing technology gives sailors a variety of options they never had before, including the ability to control a laser weapon's output and perform actions ranging from non-lethal disabling and deterrence all the way up to destruction.

"We expect that in the future, a missile will not be able to simply outmaneuver a highly accurate, high-energy laser beam traveling at the speed of light," Klunder said.

Following the USS Ponce demonstration, the Navy and DoD will continue to research ways to integrate affordable laser weapons into the fleet.